Jeep has readied four concepts for the 2021 Easter Jeep Safari, which will kick off this weekend, on March 27, in Moab, Utah, including an electric Wrangler dubbed the Magneto.

Building on the 2020 Wrangler Rubicon, it uses four battery packs with a combined capacity of 70 kWh, which are placed around the chassis for optimal weight distribution. 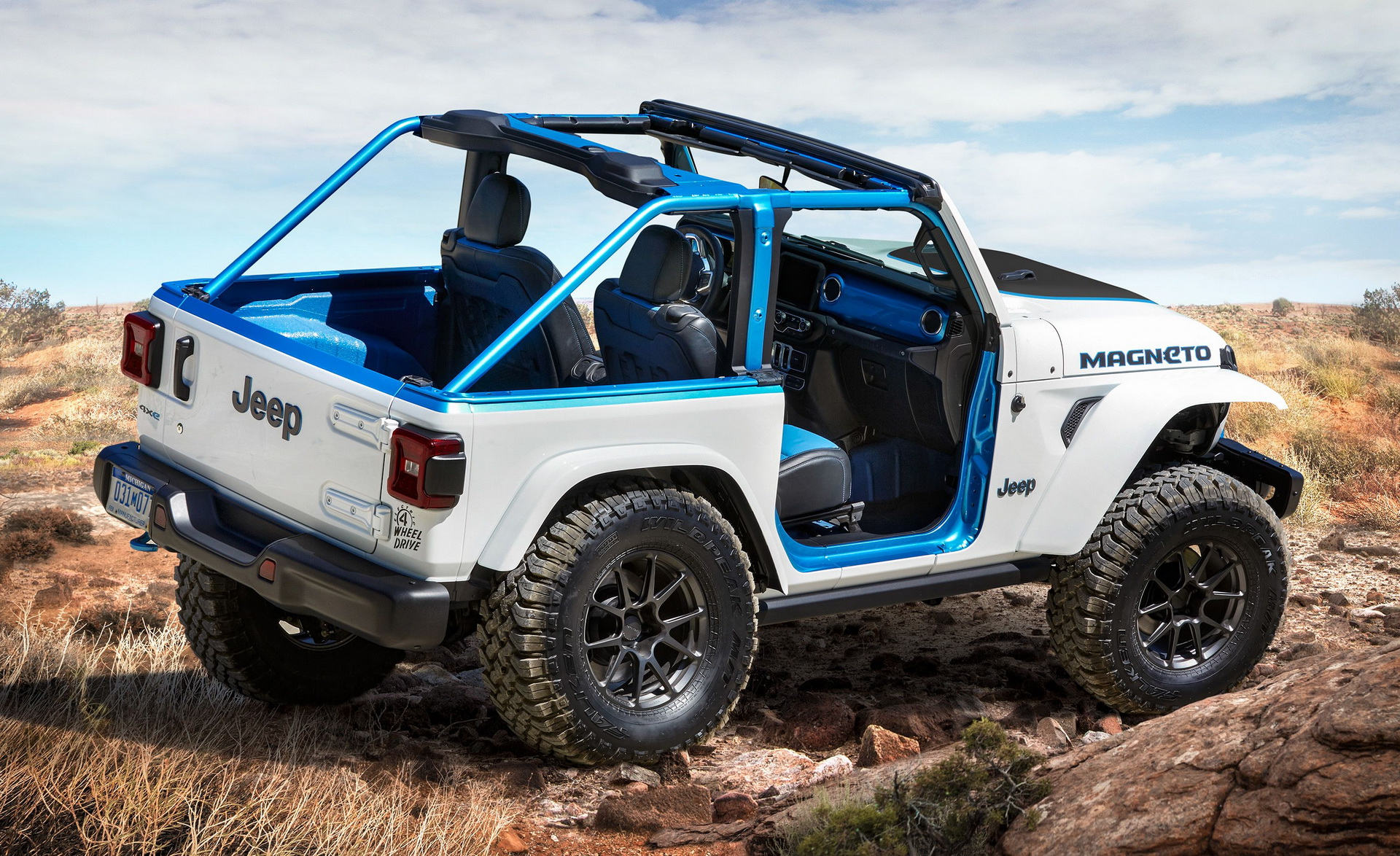 The electric motor generates 285 hp and 273 lb-ft (370 Nm) of torque, and it is coupled to a six-speed manual transmission that directs power to the two solid axles via a two-speed transfer case. The stick shift, which is an unusual addition to an EV, helps the concept operate “as it would with an internal combustion engine”, Jeep claims. According to the company, the Wrangler Magneto needs 6.8 seconds from 0 to 60 mph (0-96 km/h).

Finished in white and adorned with blue accents and ‘Magneto’ decals on the outer edges of the hood, right above the flared fenders, the electric Wrangler concept features upgraded lights, beefy bumpers, chunky rubber wrapped around the 17-inch wheels, 2-inch lift kit, winch and a roll cage. 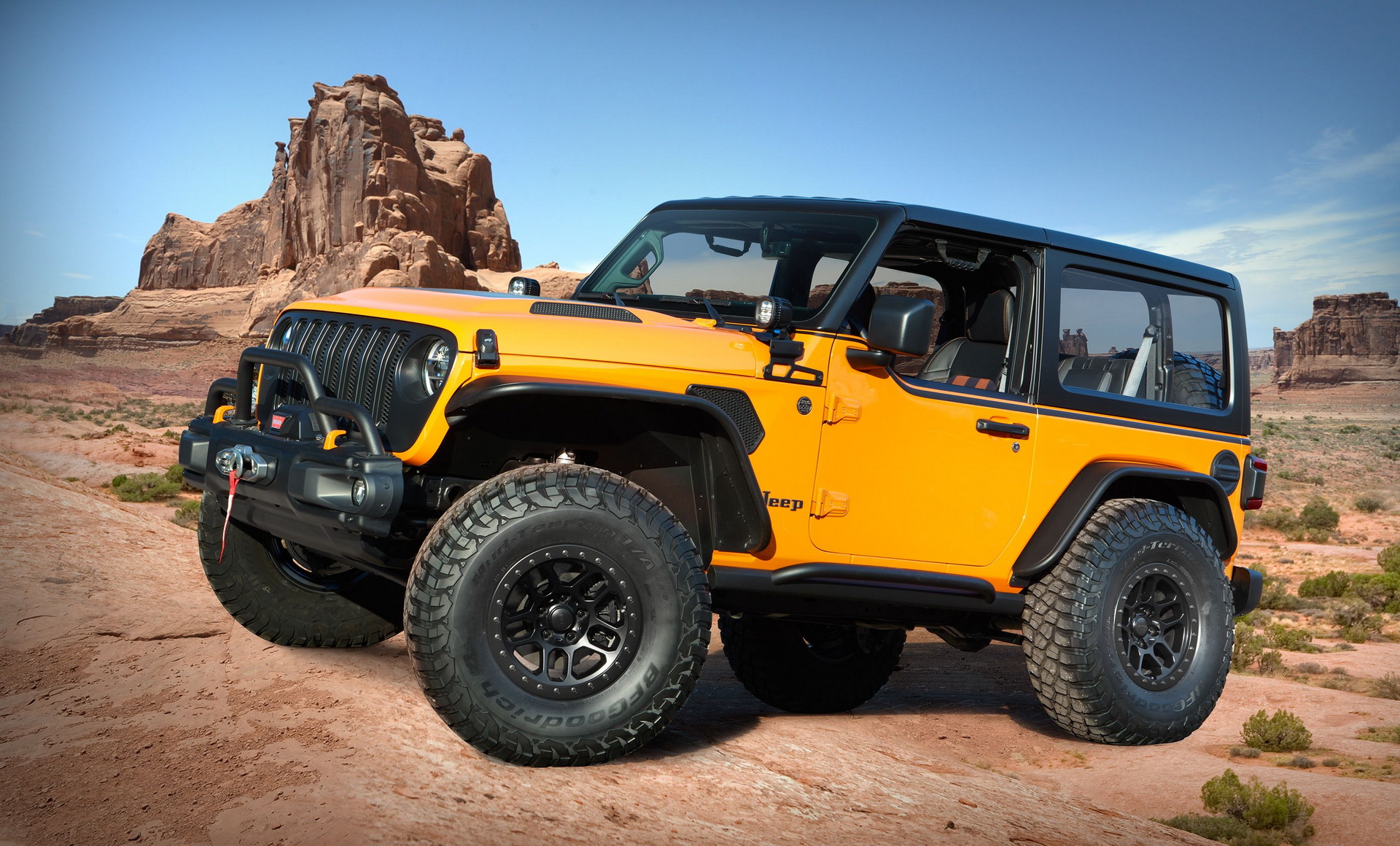 An off-road-ready concept, the Wrangler Orange Peelz is finished in an orange shade and has a Corning Gorilla Glass windscreen. It makes do without side and rear windows, sports prototype half-doors, removable sunroof, trail lights, exclusive badges and graphics, a 2-inch lift kit and M/T tires. Peel its skin away and you will find a regular two-door Wrangler powered by the 285 HP and 260 lb-ft (353 Nm) 3.6-liter Pentastar V6, hooked up to an eight-speed automatic gearbox.

Ready to take on some arduous terrains, the modified Gladiator Rubicon has a 91:1 crawl ratio, Dana 44 axles with 4.88 ratios, steel bumpers, winch, grille guard and BFGoodrich tires. It is powered by a 3.0-liter EcoDiesel V6 that produces 260 HP and 442 lb-ft (599 Nm), mated to an eight-speed automatic transmission. 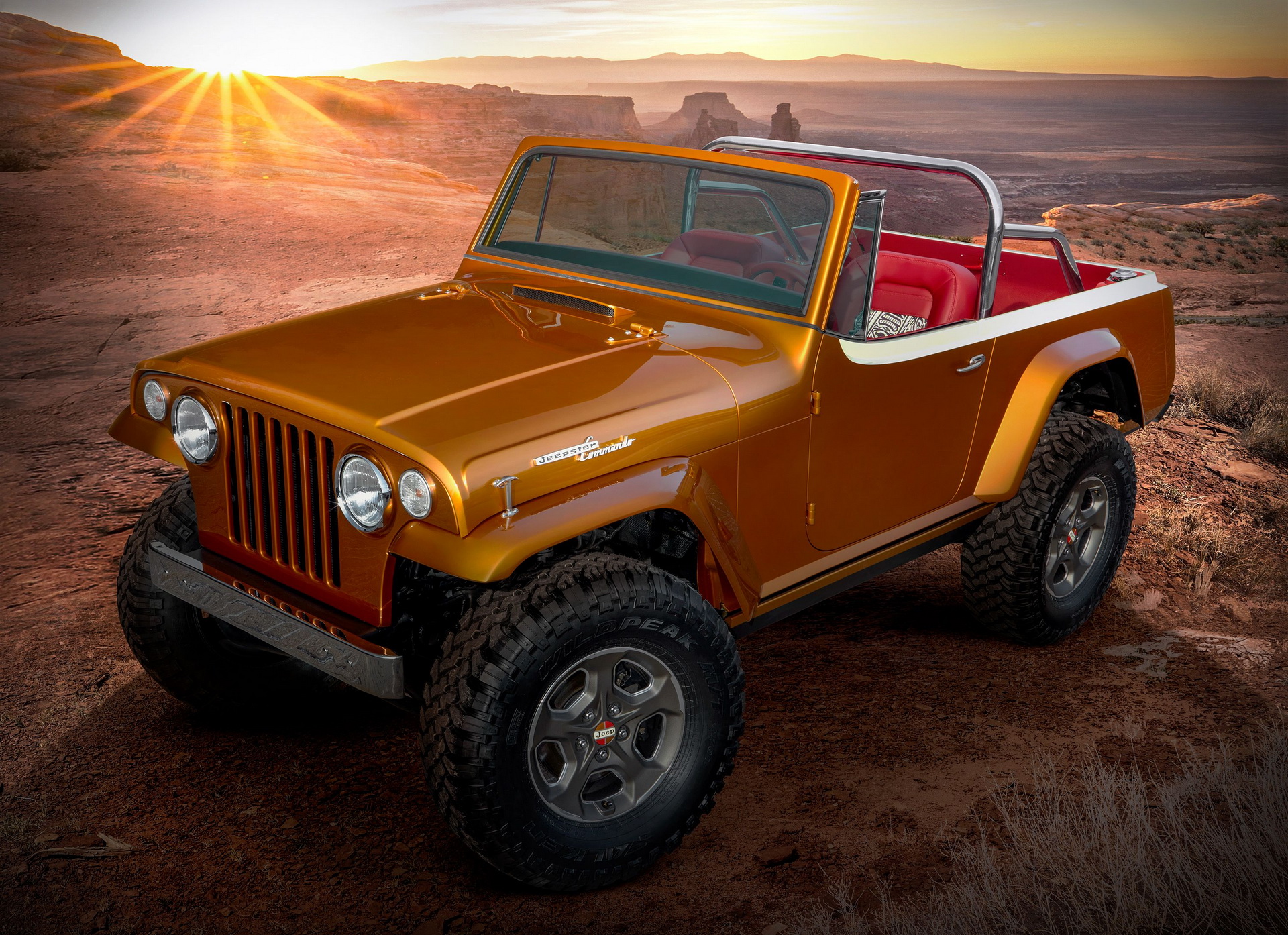 This C101 came to life in 1968 and was brought back to its initial shine with a few modern twists, a special paint finish, red leather upholstery and a few other gizmos. Powering it is a modified version of the turbocharged 2.0-liter four-cylinder engine, which is around 25 percent more powerful than standard, making 340 HP and 369 lb-ft (500 Nm).

Joining these four concepts at the event will be the Wrangler Rubicon 392, Gladiator Top Dog and Gladiator Farout.