On the 11th of February, 2010, the Nissan Juke was unveiled, three weeks before the Geneva Motor Show. Its polarizing design was its main talking point and for nine long years, it rolled out of factories in both Japan and the UK.

Finally, in 2019, the second-generation Juke hit the market and we’re happy to report that it’s no longer the eyesore it once was.

Underpinning the new model is the same CMF-B platform underpinning the likes of the Renault Captur and Renault Clio. This platform makes use of high-strength steel and if Nissan’s marketing material is to be believed, improves the SUV’s performance credentials. 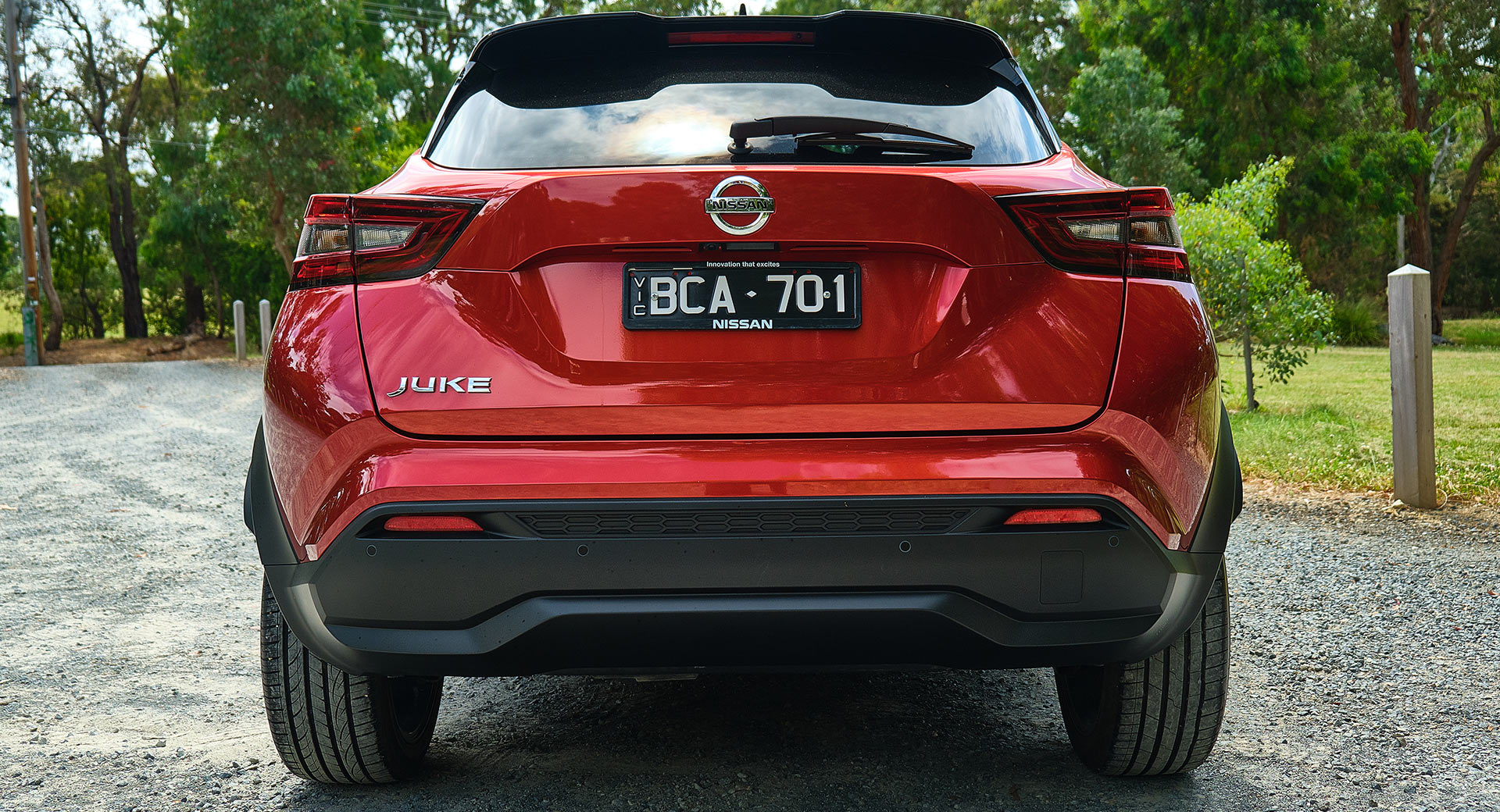 All four variants of the 2020 Juke available in Australia come with the same 1.0-liter, three-cylinder turbocharged petrol engine making 112 hp (84 kW) and 133 lb-ft (180 Nm) of torque. Working alongside this engine is a seven-speed dual-clutch transmission that drives the front wheels. Kicking off the Australian range is the ST, followed by the ST+, the ST-L and the flagship Ti that we recently tested.

Priced from AU$39,490 (US$30,641) including on-road costs, the 2020 Juke Ti certainly sounds like good value for the money and a quick read of the spec sheet prior to picking up our tester certainly intrigued me. Standard features include a Bose audio system with speakers in the front headrests, quilted and leather front seats, an 8.0-inch touchscreen with Apple CarPlay and Android Auto, satellite navigation, digital radio, Bluetooth connectivity, a rear view camera, adaptive cruise control, LED headlights, and even ambient lighting.

I wasn’t left disappointed when stepping into the cabin for the first time. In fact, I was very impressed, especially considering the SUV’s starting price. The driving position is nice and the plush Alcantara inserts across the dashboard, door panels, and center console add a level of luxury that you won’t find in many other vehicles like this. 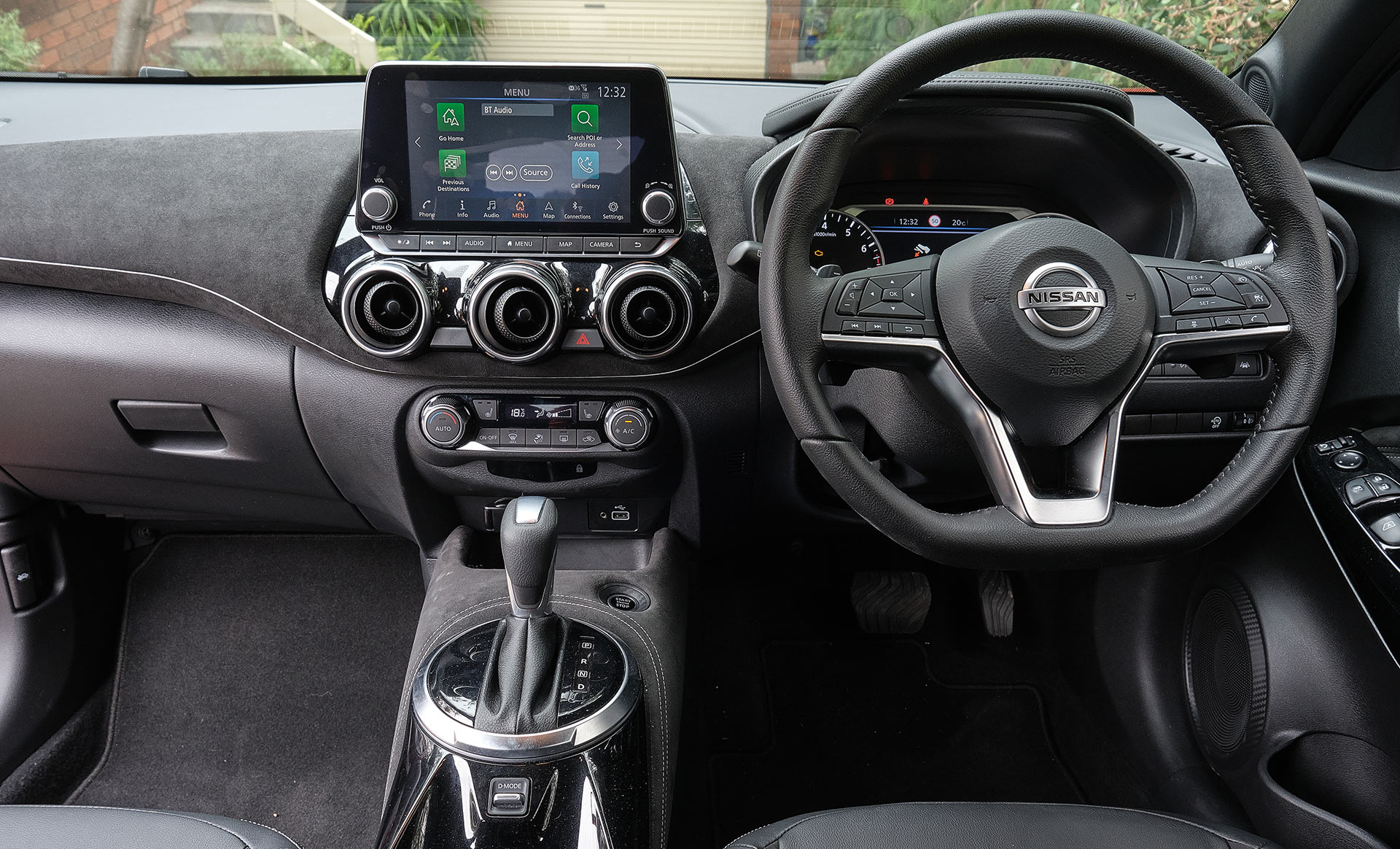 Admittedly, the infotainment system is far from the most responsive on the market and has the same lackluster UI as other Nissan models. However, I quickly forgot about the touchscreen’s shortcomings when I connected my phone and played some music. The eight-speaker Bose sound system is great, providing the type of crisp and clear audio you would normally only expect from a more premium vehicle. The additional speakers in the headrests may seem like nothing more than a marketing ploy to entice audiophiles but trust me, they do add to the audio experience and aren’t just there for show – although they do look rather cool.

Second row passengers may also be impressed. Rear seat room is good, even for taller passengers, and the seats have the same funky leather and Alcantara design as the front. Heck, there’s even Alcantara on the rear door panels. There are no air vents, however, which is a bit of a shame. Cargo space sits at 422 liters (14.9 cubic feet) and with the rear seats dropped that increases to 1,305 liters (46 cubic feet). 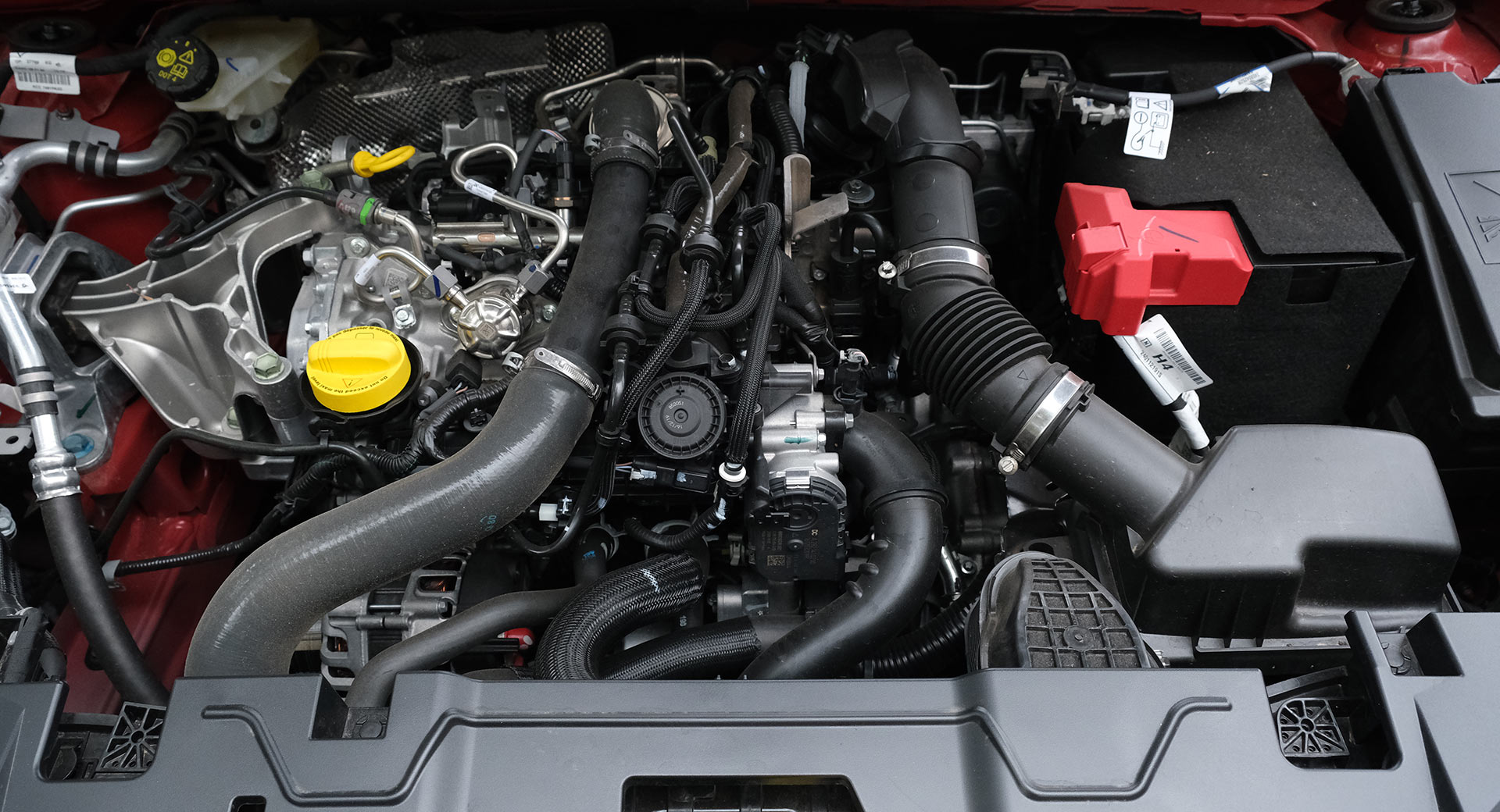 The aforementioned 1.0-liter turbocharged three-cylinder engine should, according to official figures, return a claimed 5.8L/100 km (40.5 U.S. MPG) on the combined cycle although during our week with the car it returned 6.9L/100km (34 U.S. MPG), a number that’s still very respectable. It also handles everyday driving duties very well.

With figures of 112 hp and 133 lb-ft, the Juke Ti isn’t fast but it is more than adequate to zip around urban roads and take on long highway jaunts. Most of the times, you don’t need as much power in a car as many automakers would like you to believe and considering the Juke has a curb weight of just 1,274 kg (2,808 lbs), we never yearned for more oomph.

Throttle response is good and like many other three-cylinder engines, this one delivers quite a pleasant soundtrack. With that being said, it can feel a little rough at times. Speaking of rough, there’s the seven-speed dual-clutch transmission.

A traditional automatic would be better.

As impressive as the engine is, the transmission is the Achilles heel of the new Nissan Juke. Getting off the line smoothly quickly becomes a chore as the seven-speed simply refuses to operate in a smooth and linear manner. The jerkiness and hesitancy of the gearbox is most evident during low-speed driving, in particular through parking lots and results in a vehicle that is frustrating to drive at anything below 6 mph (10 km/h). 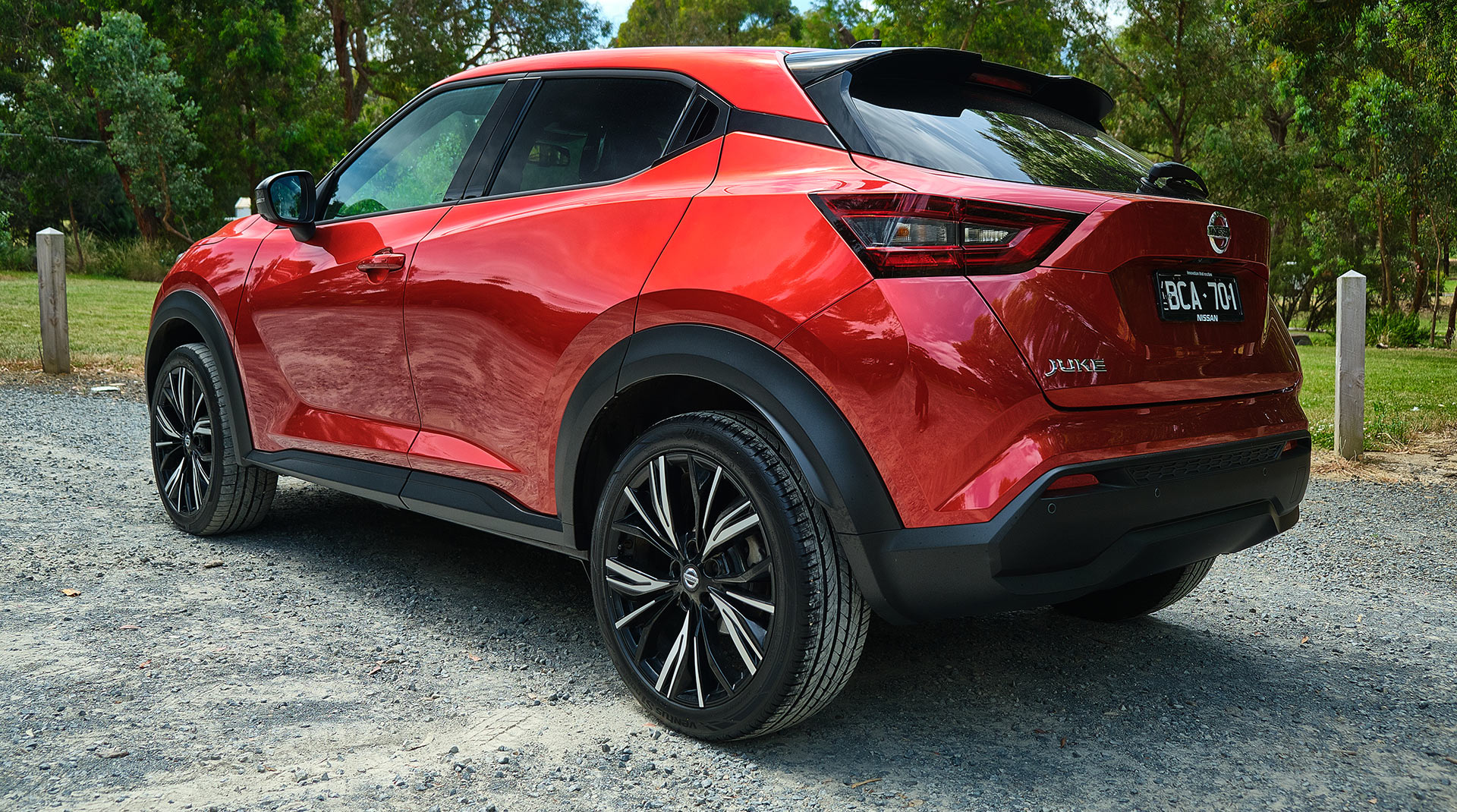 Things do improve when you’re on the move. The Juke has well-weighted and direct steering, allowing you to perfectly place it through corners. The chassis is also rather fond of sporty driving and provides good feedback. While some shoppers will no doubt be surprised by the relatively firm ride, we suspect many will like it.

It would be remiss of us not to briefly talk about the exterior design of the new Juke. While the old car had many detractors, the new model is a vast improvement and looks even better in the flesh than it does in photos. The front-end is just as striking as the first-generation Juke but it is also much more refined and grown-up. The LED daytime running lights are an especially nice feature and also add to the premium feel of the SUV. 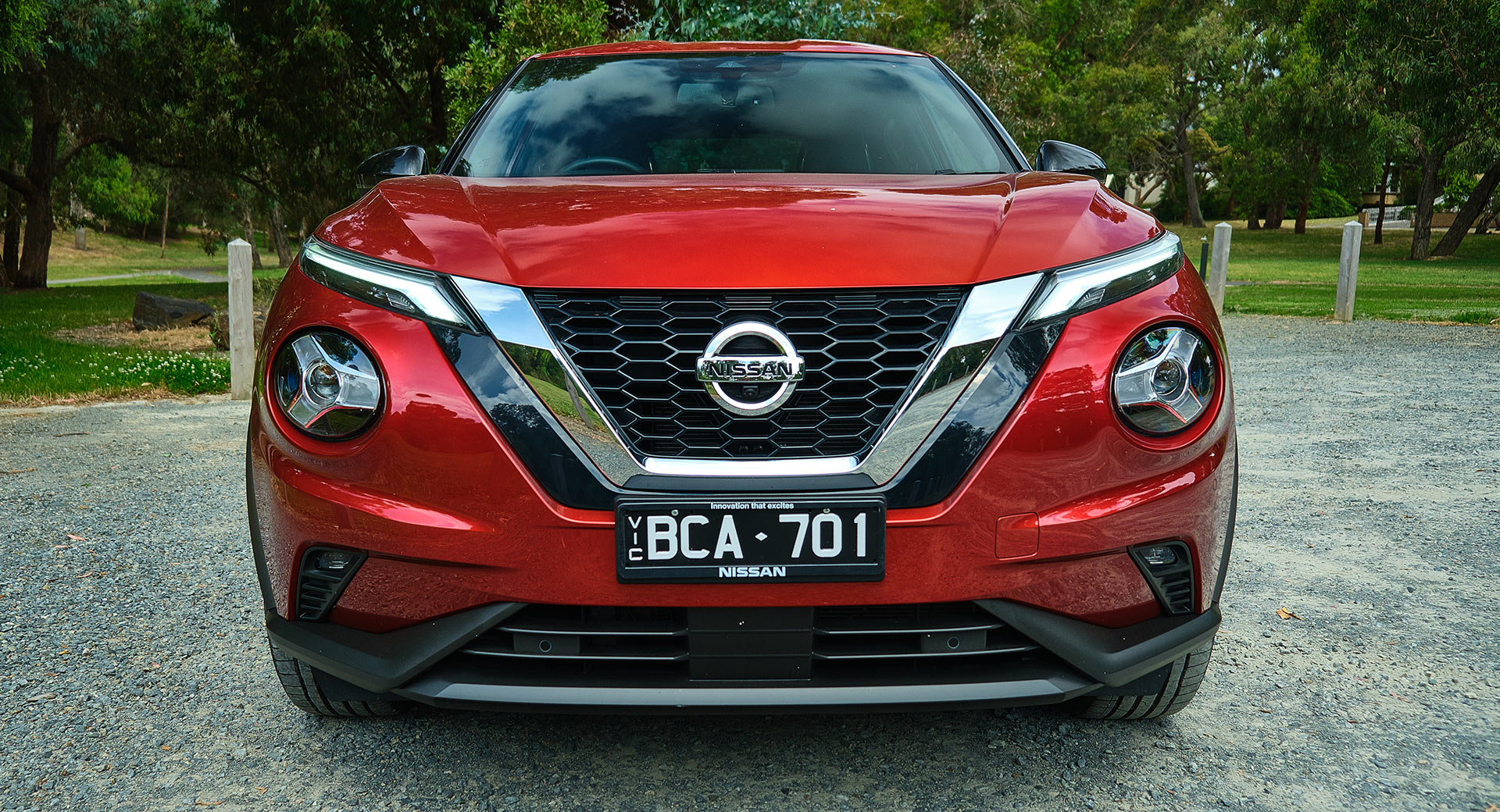 Our favorite angle of the new Juke is the side. The 19-inch black and silver wheels of the Ti variant look nice and the sharp body creases running along the doors catch the eye. The roofline and squared-off rear haunches also suit the fun personality of the Juke.

It’s no secret that Nissan has been struggling in recent years and with the second-generation Juke, it could have got away with simply tweaking the original and calling it a day. It didn’t do that, though, but instead left no stone unturned in developing it. The new Juke is a good crossover and will no doubt prove popular among younger buyers. 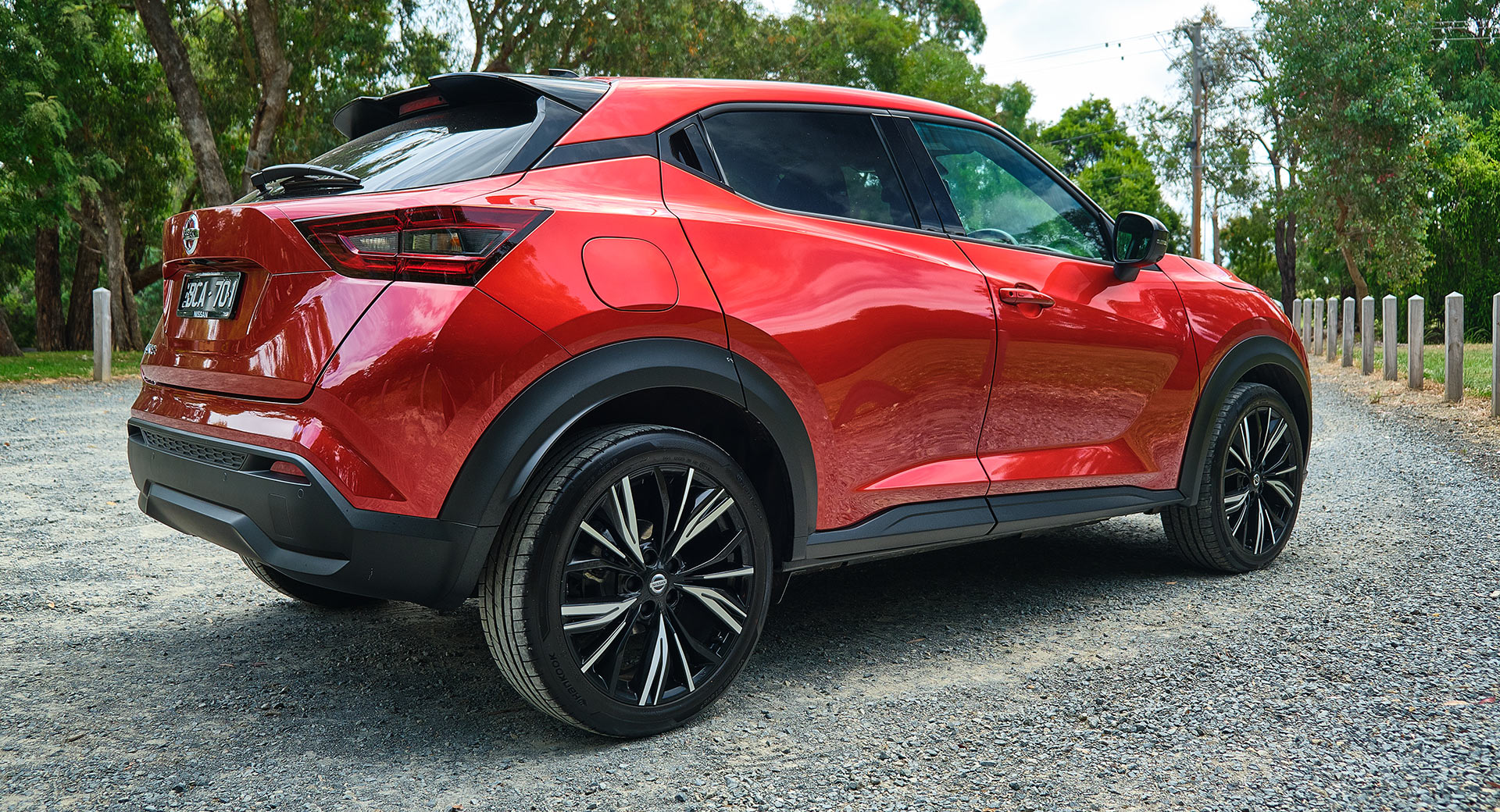