Mercedes-Benz has just unveiled their latest interpretation of the C-Class. One of the company’s most valued models, the C-Class, has long been the junior-executive class’s champion, with 10.5 million units sold since 1982.

For several years, it was the entry-point to Mercedes-Benz ownership, to which many aspired. Nowadays, with multiple “A” and “B” models, the C-Class is no longer an entry-level product. However, it remains a pillar of Mercedes’ brand strategy, along with other legacy nameplates such as the E-Class and S-Class.

The new C-Class Sedan brings with it some noticeable changes to the C philosophy. The concept of downsizing has been embraced, with all six-cylinder and V8 power plants shown the door. For the first time, all C-Classes will feature electrified four-cylinder drivetrains.

Looks like a mini-S Class (or an x-large CLA), doesn’t it?

The exterior design is kept relatively conventional, but the interior design has received heavy influence from the S-Class, albeit with a few tweaks to make it feel unique. Other markets will have access to a C-Class Wagon, although no launch details have been announced for that body style yet in the U.S.

The new C-Class is bigger in almost every way. The wheelbase has grown 1 inch (2.54 cm), giving rear-seat passengers an extra 0.8 inches (2 cm) of legroom. Headroom is increased in the rear by 0.6 inches (1.5 cm), and elbow room and shoulder room gets a bump of around 1 inch (2.54cm) for front-seat passengers. 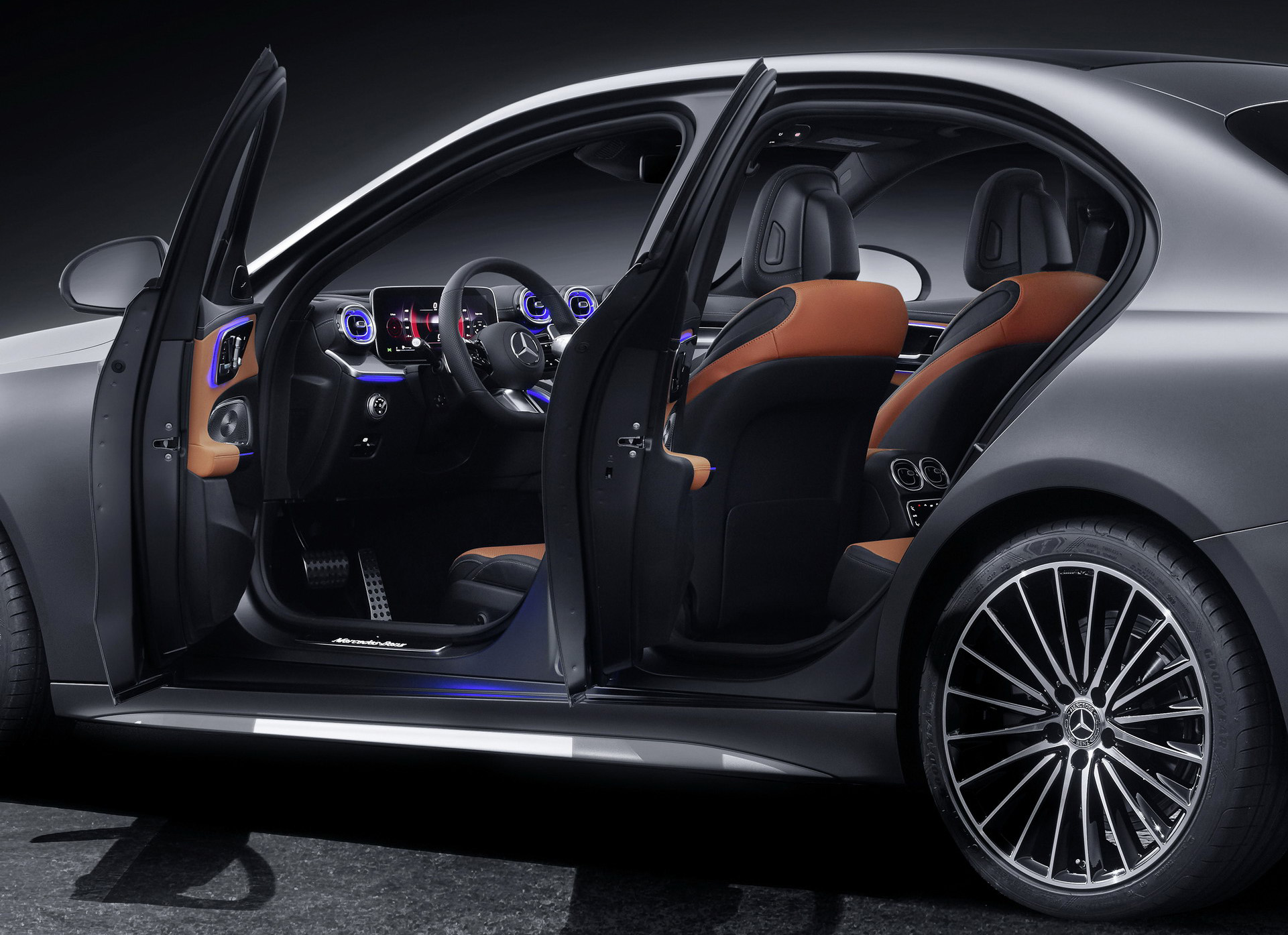 Just The One Engine, Two Drivetrains At Launch

U.S. customers can only expect to see one engine at launch. The C300 will feature Mercedes’ M254 petrol engine. A four-cylinder turbocharged lump, the M254 also features in the E-Class. It incorporates 48V architecture making the C300 a mild-hybrid, with an integrated starter-generator (ISG). It allows a boost of up to 20 hp (20.2 PS) and 148 lb-ft (200 Nm) of torque for limited periods. With the mild-hybrid system, the C300 can glide with the engine completely off and harvest energy from deceleration.

Read: Mercedes Reveals Why The C-Class’ 6-Cylinder Had To Go For 2022

The C300’s engine features a new twin-scroll turbocharger arrangement, which supposedly translates into less lag. However, there’s another aspect that will appeal to performance-minded drivers. The turbocharger directly results from Mercedes’ involvement at the pinnacle of motorsport, trickling down from their Mercedes-AMG F1 team. Part of these improvements is the ability to overboost in conjunction with the ISG. 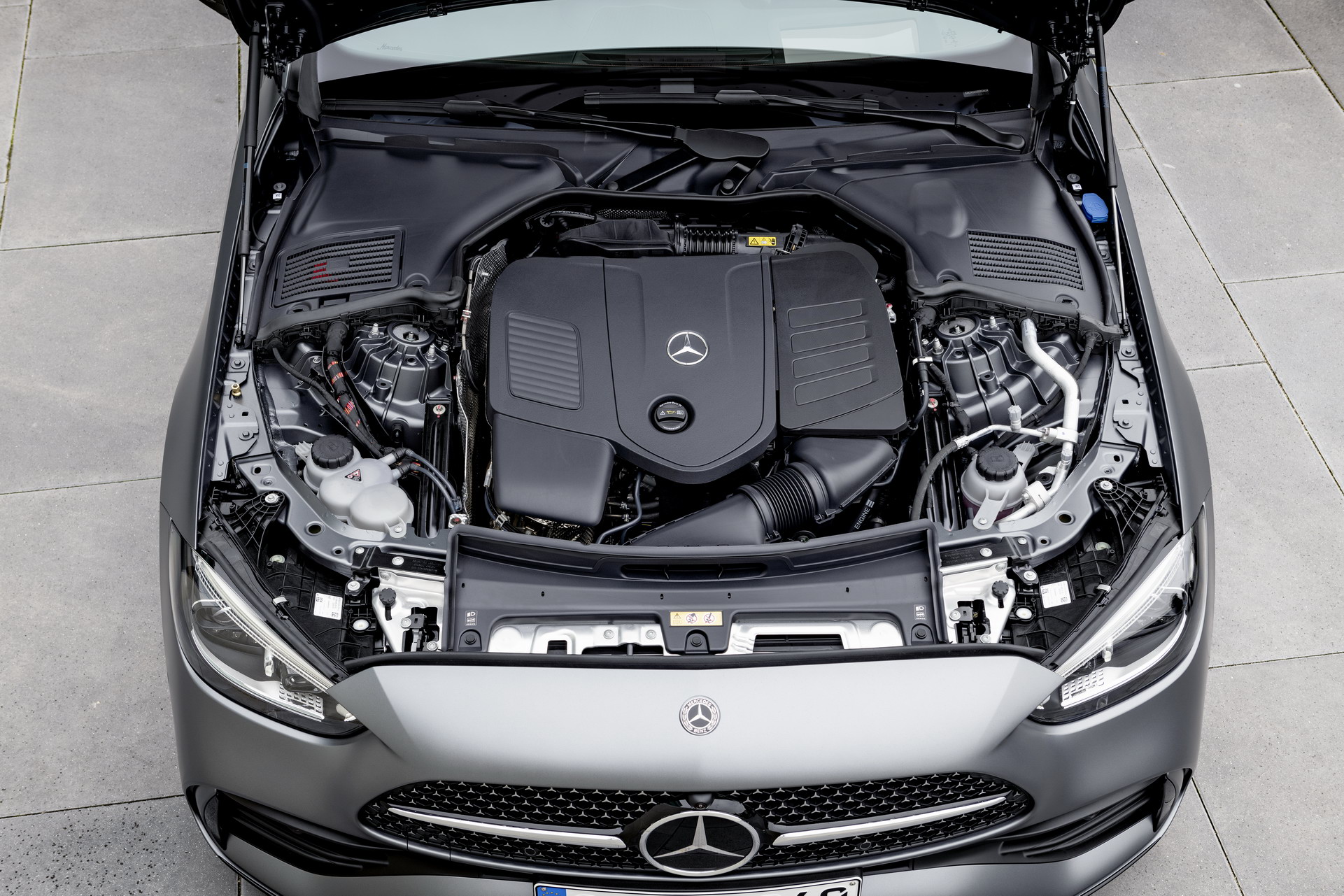 The C-Class engine is still mounted longitudinally, sticking with the rear-wheel drive chassis expected in this category. However, the C300 4-Matic features all-wheel drive, with a new front axle that allows the system to send more torque to the front wheels.

All variants offered at launch will feature a single transmission option, with Mercedes culling all manual gearboxes. The transmission is their ‘9G-Tronic’ 9-speed, which is 30% lighter than the outgoing model. It also promises to save space, benefiting packaging while also increasing efficiency. 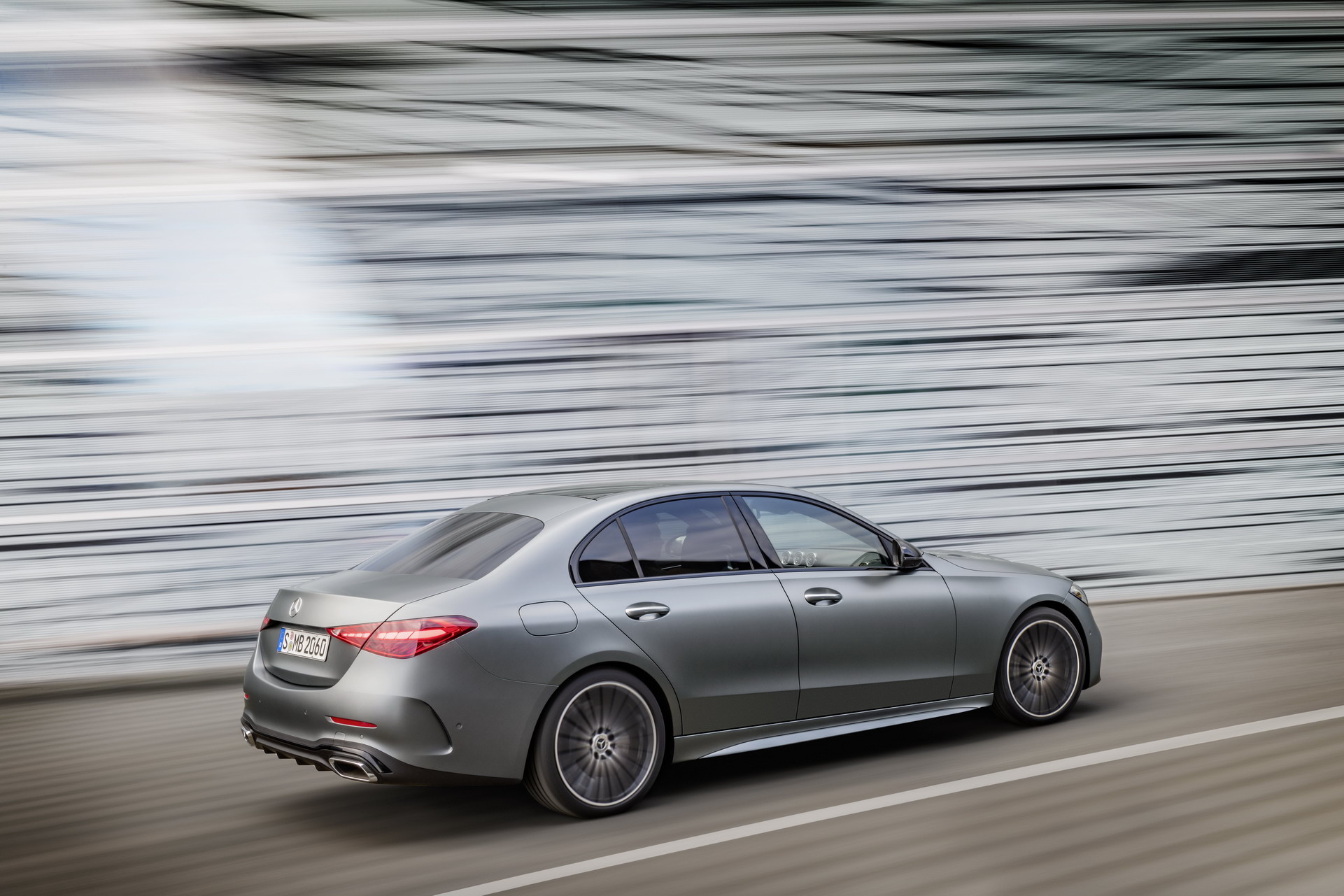 The C-Class has never been a style icon per se, often choosing a safe, inoffensive policy and letting grille design and AMG accessories add a bit more aggression if needed. The latest C-Class mostly follows that philosophy, although there’s no denying that the new design lacks distinction from other models in the Mercedes-Benz line-up. The rear is reminiscent of the S-Class, while the front takes more than a few cues from the E-Class and the smaller CLA and A-Class. We suspect at-a-glance model identification will be challenging for even the most knowledgeable Mercedes devotees.

As before, you get two different grills — all of which feature the sizeable central-mounted star. With the standard exterior, there are decorative elements in the louvers, while the radiator grille and front bumper feature chrome surrounds. The distinguishing feature of the AMG Line is the striking diamond grille with the star design in chrome. Similar subtle “line” options can be found in the rear bumper, with trim dependent on model or options packs.

The Interior of the C-Class sees what could be the most significant single make-over in the model’s history. As predicted, it takes heavy inspiration from the S-Class. The centerpiece is the large 11.9-inch (30.2 cm) portrait-oriented screen. The main difference to the S-Class is that the dashboard and center display has been angled towards the driver by six degrees.

In addition to the central portrait display, the driver area features a 12.3-inch high-resolution display as standard. The operating system is the latest version of MBUX, which, combined with the Hey Mercedes voice assistant, promises to offer a connected, phone-like experience for users. Updates will be pushed out over-the-air (OTA), and a new augmented reality option is available for navigation. With this, a live camera feed will be projected to the central display, where navigation prompts are then overlaid. 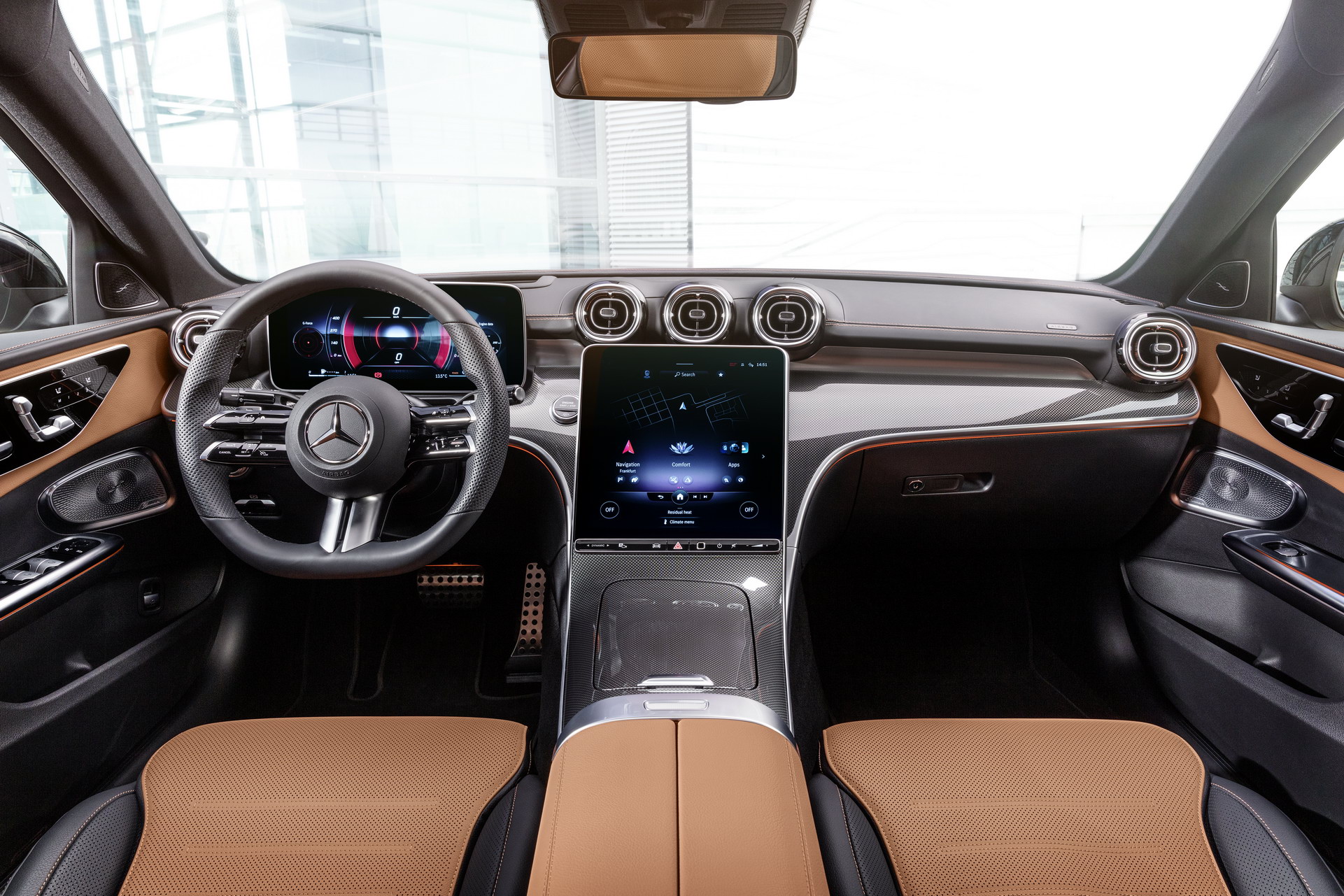 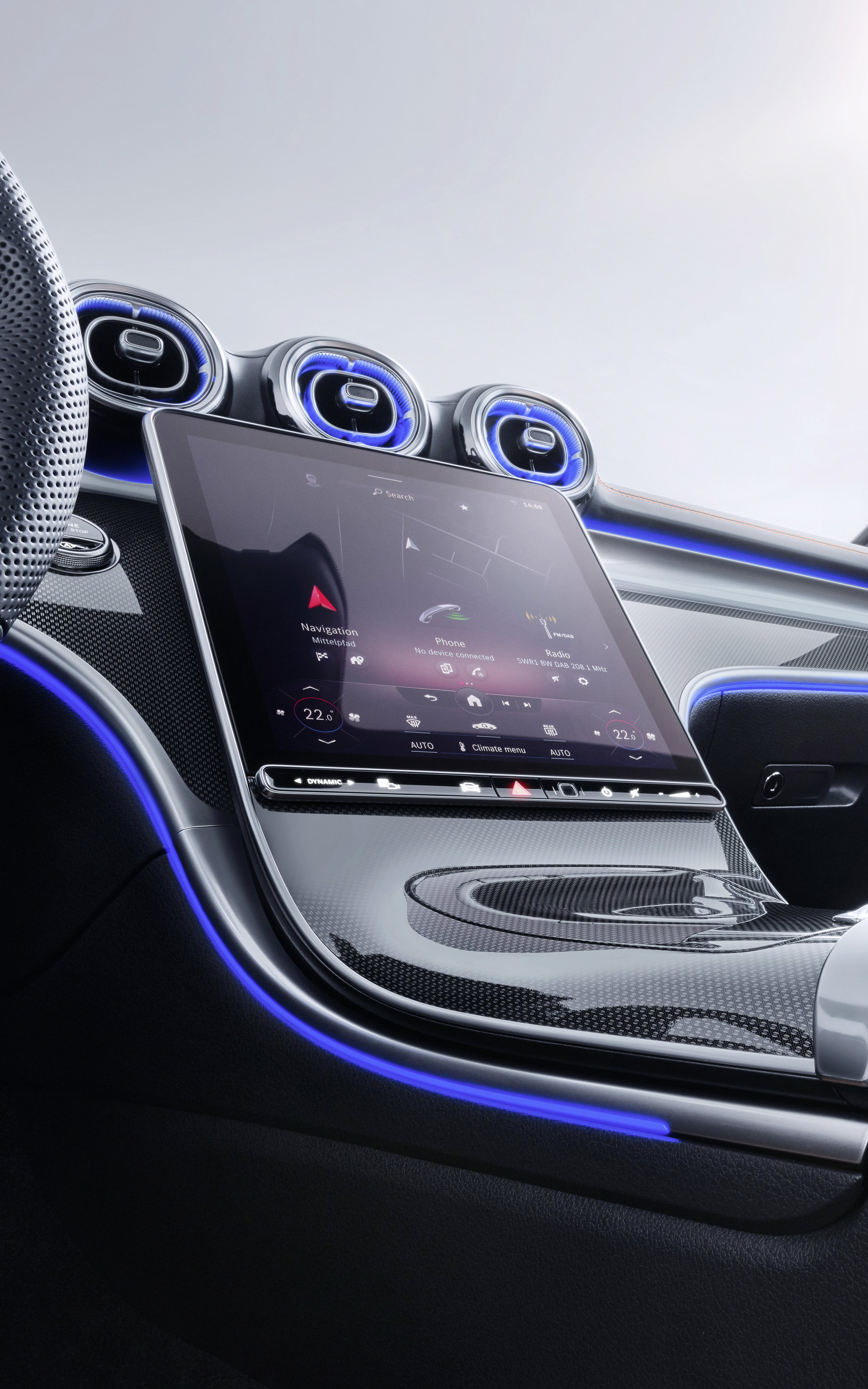 On Sale In Europe This Year, North America Will Wait Until 2022

No firm date has been set for U.S. sales, with Mercedes stating that cars will start arriving at dealers in early 2022. Prices for both the C300 and C300 4-Matic are to be announced, although we don’t expect a significant deviation from the current generation’s pricing strategy that starts from just under $42,000 in the USA.

Let us know what you think of the new C-Class. Would you choose one over a BMW 3-Series, Audi A4, or Lexus IS from first appearances?