The Himalaya is an active transcontinental mountain chain in Asia, growing at a few millimetres per year. Over millions and millions of years, a snail-paced tectonic push has brought this mountain to its current towering stature. As the jagged mountain peaks would testify, the dynamic Himalayan landscape is also subjected, in equal measure, to the erosive forces of climate that are constantly at work to wear them down. In all its environmental and landform complexities, the Himalayas are a product of a dynamic balance between the invisible natural processes at work in the region, and the tension exerted by these forces or their agents, often, in the form of earthquakes, avalanches, and floods.

The Himalayas contain the largest volume of snow and ice outside the Polar Regions. The ‘Third Pole’, as it as also referred to, has a huge repository of glaciers – the point of origin of some of Asia’s major rivers. It is also a prime regulator of the general global climate, and Asia in particular. A billion people living downstream of these rivers in China, India, Pakistan, and other Southeast Asian countries, depend on the Himalayas and the Tibetan plateau to meet their water needs. With its transcontinental placement running through the most populous part of the world, the Himalaya is now also subject to various anthropogenic forces. Scientific studies inform us that this third type of force, now recognized as the chief driver of global warming, is impacting the natural balance and accelerating environmental change in the mountain range.

Ecosystem degradation that predicates on the rising temperature and consequent losses of ice in the Himalaya have direct bearing on long-term water availability for the riverine Asian countries including India. The Himalayas contain the largest volume of snow and ice outside the Polar Regions. Nearly one billion people living downstream in China, India, Pakistan and Southeast Asia depend on the Himalayas and the Tibetan plateau for water. Recent projections indicate that the region around Mt. Everest may lose 70-99 per cent of glacier volume by the year 2100 as a result of warming caused by greenhouse gas emissions. These findings portend an alarming situation.

The Himalayas, often considered the ‘Third Pole’ is both vulnerable and a global hotspot for biodiversity. But the Nepal government appears not to have learnt anything new towards conserving the ecosystems, experts say. Image: NASA

But the losses of glacier ice have now attained an immediacy in the backdrop of their potential connection to the increased frequency of flood hazards in the Himalaya. The devastating 7 February flood in the Rishiganga River in the Chamoli district of the Garhwal Himalaya was the latest such example. The satellite images covering the event, circulated widely in the media, indicate that the whole process began as a rock slope detachment and a huge quantity of rolled down with tremendous speed and landed on the top of a hanging glacier (in the Raunthi glacier area), instantly transforming the glacier ice into water. The water mixed with rocks and other debris surged down, the pressure of debris further squeezing the water-sodden sediment, triggering a cascading flood of water down to the river valley.

Unlike the 2013 Kedarnath flash flood, the Chamoli incident of rock avalanche shows no evidence of glacial lake breach at the top of the top of the mountain. Still, both incidents are likely related at a fundamental level, for its triggering mechanism – the untimely melting of permanently frozen ice or otherwise called permafrost. Mountain permafrost is the ice in the cracks and crevices between the rocks that hold them together and help stabilize steep slopes. If the melting of mountain permafrost – the glue that binds the fractured rock to the surface ice – is what triggers the destabilization of the mountain slopes, then the overall warmer temperatures in the last few decades must have been the cause for it to melt. Could this also be what is causing a higher frequency of slope failure in recent decades, creating rockslides and rock avalanches in the Himalayas? In one comparable event that took place on 5 May 2012,  the Annapurna Mountains caused floods in the Seti river, Kaski district in Nepal.

Rock avalanches are initiated at higher elevations and the northern slopes is that those are areas that have more mountain permafrost and are most susceptible to changes in long-term temperatures. These observations and hypotheses can be compared with additional observations in the future to see if they hold up. If indeed warmer temperatures cause destabilization of steep slopes in traditionally cold climate regions, there will be more high-risk areas for rockslides and rock avalanches in the future. 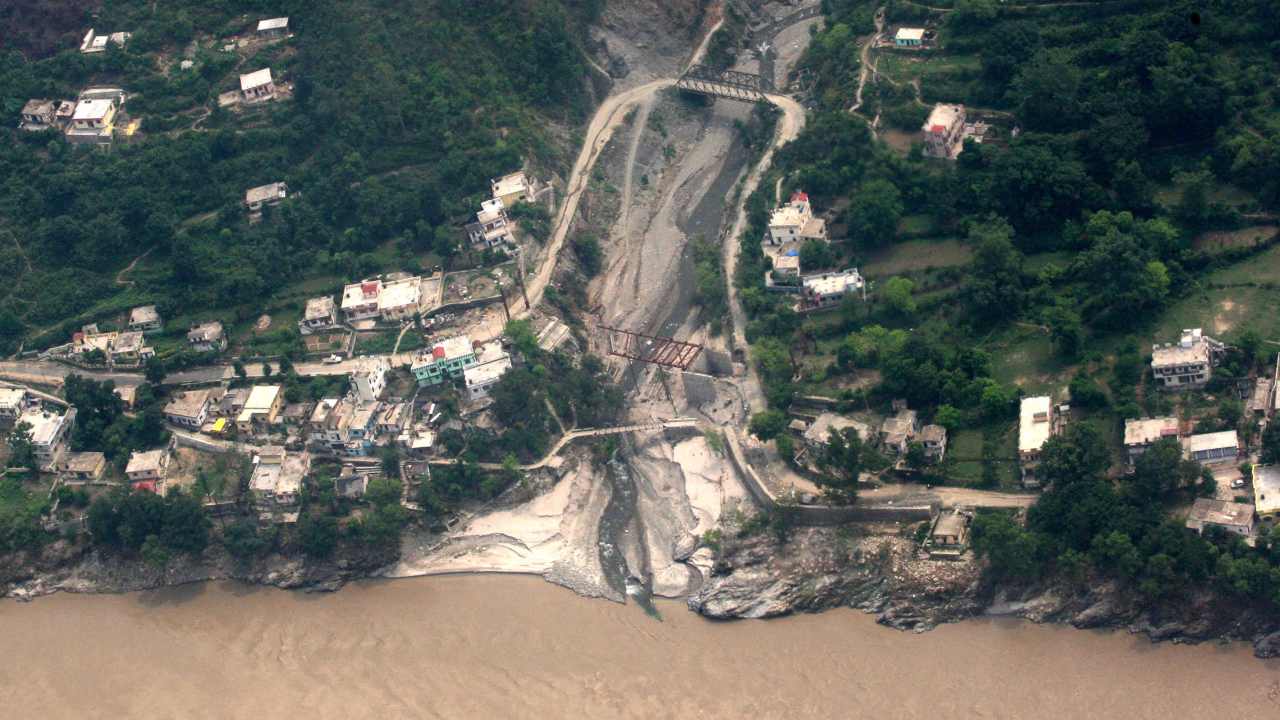 An aerial view of flood-ravaged Rudraprayag in Uttarakhand, in the aftermath of the devastating deluge in June 2013. Image: PIB

According to a study that analysed satellite images between 1975 and 2000 published in the journal Science Advances in June 2019, around 650 glaciers across India, China, Nepal and Bhutan are showing signs of retreat. The study identifies the global warming as the reason for melting and loss of glacial ice over a large area confirms the role of global warming. Scientists have also alerted us on the retreat of some of the glaciers in the Uttarakhand Himalaya. A report published in 2018 by the Divecha Centre for Climate Change, Bengaluru, informs that the average temperature in the northwestern Himalaya has risen by 0.66º C since 1991 – an increase much higher than the global average. The higher Himalaya became even warmer on average in the same period. Scientists from the Snow and Avalanche Study Establishment (SASE) in Chandigarh also reached the same conclusion – that winters in the northwest Himalaya have been getting warmer and wetter in the last 25 years.

According to The Himalayan Climate and Water Atlas, published by ICIMOD, GRID–Arendal and the Centre for International Climate and Environmental Research–Oslo (CICERO) in 2015, the Hindu Kush Himalayas are warming significantly faster than the global average. An ICIMOD study published last May also said that Nepal’s glaciers in the Dudh Kosi basin, which is home to some of the world’s highest mountain peaks, including Mt Everest had lost a quarter of their area over the last three decades. Temperatures across the region are projected to increase by about 1 to 2 degrees Celsius on average by 2050. The consensus is that global warming is already showing visible impact in the Himalayas, but more field and satellite-based studies are needed to quantify these changes.

I must admit that I became a believer in glacier retreat after I met a Buddhist monk in the far-eastern Bhutan bordering India – a country landlocked in the Eastern Himalayas. Trekking alongside him in the mountains there a few years ago, he showed a group of us the glaciated mountains in the distance, and told us that the glaciers were indeed retreating. He has been watching these changes since his childhood, and this, I consider a credible report from the field.

CP Rajendran is an adjunct professor in the National Institute of Advanced Studies, Bengaluru.