Although it’s five inches longer than the outgoing model, Nissan tells us that it didn’t want its new Frontier to grow too much. The company was focused on finding a just-right size for the mid-size pickup.

However, even though the chassis has been thoroughly re-engineered for 2022 and the overall length increased, the wheelbase is the same as the outgoing model. Power also comes from a familiar engine, though Nissan disclosed that when they introduced the 3.8-liter V6 for MY2020.

The engine makes 310 hp and 281 lb-ft of torque. That’s easily more power and torque than the Chevy Colorado (with optional V6). The Ranger’s EcoBoost, meanwhile makes much less power, but more torque.

Also Read: 2022 Ford Maverick: Everything We Know About The Blue Oval’s Baby Truck

The Frontier‘s V6 is hooked up to a 9-speed automatic. Although EPA numbers aren’t ready yet, Nissan says that the economy numbers will be similar, if not better than the outgoing model’s 18/24/20 mpg.

The new look, meanwhile, has been designed to be as rough and tumble as possible. Many of its design cues were inspired by the Nissan Hardbody truck from the ’80s and ’90s. The truck was famed for its off-road capability, and it’s some of that ruggedness that Nissan is attempting to capitalize on.

The company describes the truck’s design as ‘interlocking’, with parts looking like they should fit together like jointery. Its designers also said they took inspiration from things Frontier owners have in their pockets, like carabiners.

Nissan also worked on making the Frontier more capable and comfortable. That means it used its Zero Gravity seats to make long drives as painless as possible. The automaker also retuned the steering rack to provide better on-center feel.

The 9-speed auto also comes into play. Its wider array of gearing options means not only that it can make better use of its low-down grunt, but can make highway cruises less fatiguing. Larger front and rear stabilizing bars, meanwhile, should mean that the truck doesn’t pitch and roll as much either. 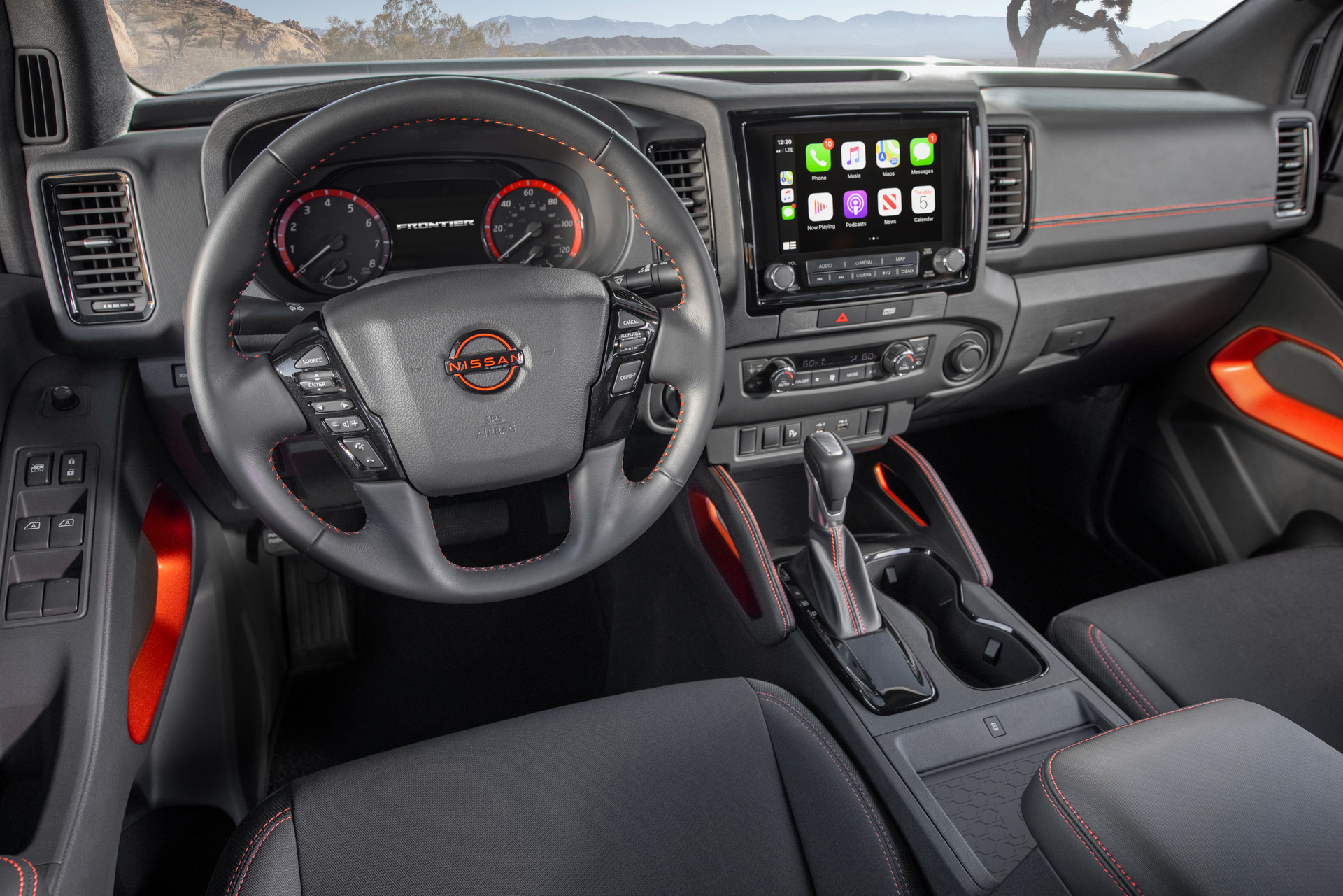 As for things that are less comfort- and more capability-oriented, the 2022 Frontier is offered in both rear- and all-wheel-drive (unless you’re in Canada where only AWD is available). Hill Start Assist and Hill Descent Control are both standard, but there’s more to be had if you’re willing to tick a few options boxes.

If you opt for the PRO-4X trim, you also get electronic locking diffs, Bilstein off-road shocks, and underbody skid plates to protect all of the Frontier’s precious innards while it’s off-roading. Up front, the Frontier makes use of independent double-wishbone suspension with twin-tube shocks and hollow stabilizer bars. At the rear, it’s overslung multi-leaf springs with a solid axle (a Dana one, in the PRO-4X’s case). 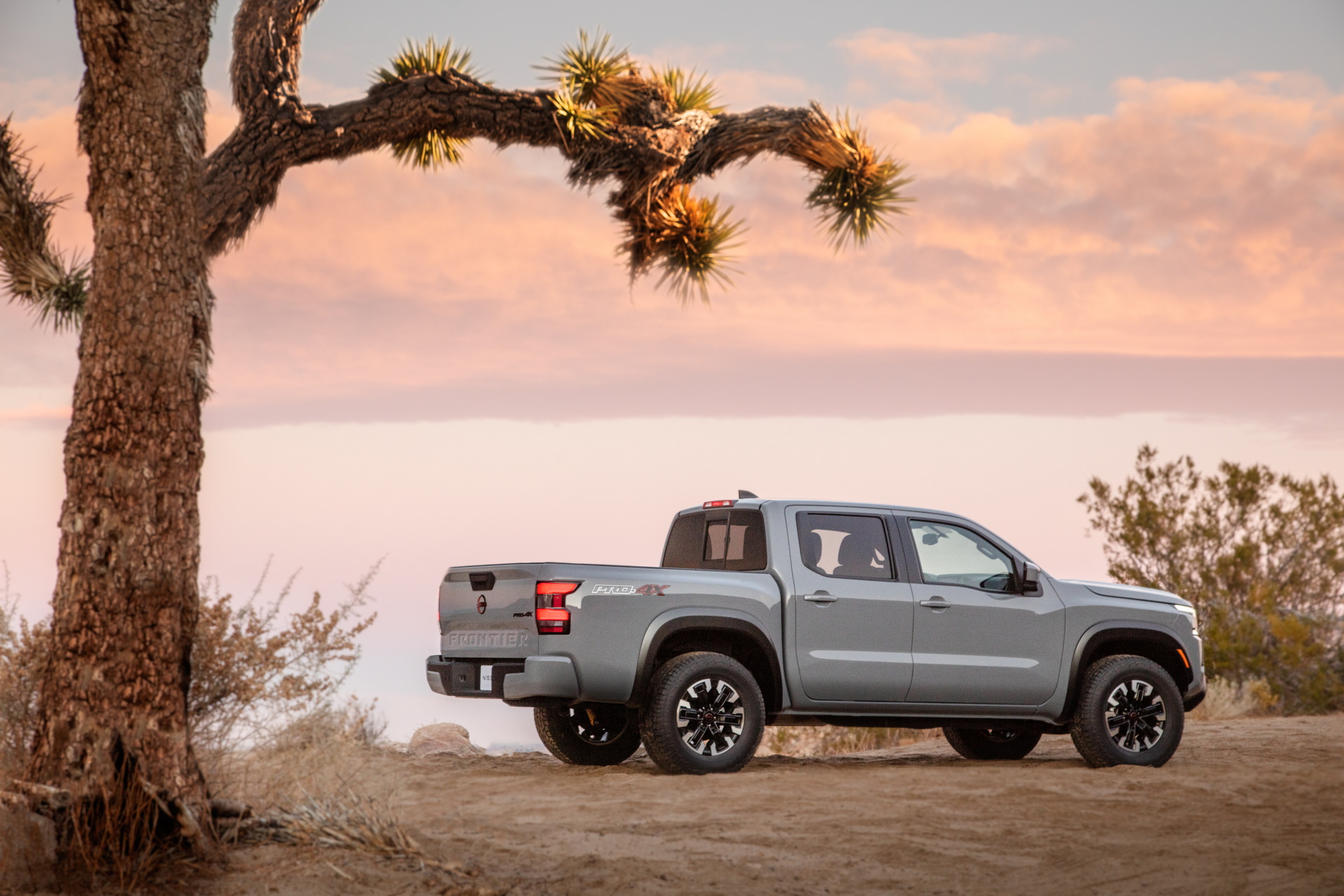 The Frontier is offered in either King or Crew cab and the bed comes in at 5- or 6-feet-long, depending on the trim you opt for. The frame is fully boxed in either case for more strength.

Inside meanwhile, the latest feature you’re likely to notice is a new 9-inch touchscreen that comes standard with Apple CarPlay and Android Auto. A 7-inch instrument cluster gives the driver all the information they could need.

Under your right arm, is about a gallon of storage. That’s almost twice as much of the competition. Nissan made a big effort to get as much storage as possible out of the cab, though, and has also added 1.5 gallons (5.7 liters) of storage in the rear doors, and 1.7 gallons (6.5 liters) in the front doors.

The Frontier has also been loaded with Nissan’s latest safety technology. A 360-degree camera will help you navigate tight trails, while Safety Shield 360 should help you navigate highways. With automatic emergency braking, pedestrian detection, blind-spot warning, and more, the truck should be popular with the safety-minded.

Pricing has not been revealed yet but, like the EPA fuel economy ratings, should be revealed closer to the Frontier’s on-sale date. Deliveries are expected to start this summer.