When it was designing the latest iteration of the Pathfinder, Nissan turned to the original SUV for inspiration. That helps explain the 2022 model’s new chunky design and, specifically, the three slots at the top of the grille.

Although the rugged new styling might be the most notable change for the Pathfinder, a new transmission, different proportions, and a better suite of technology all feature prominently. To start, Nissan slotted a familiar 3.5-liter V6 under the hood.

Making 284 hp and 259 lb-ft of torque, it’s the same engine Nissan uses today, but the automaker should be able to get more out of it thanks to a new 9-speed automatic. It replaces the CVT and, although EPA figures have not yet been released, it should help it achieve better fuel economy than the outgoing model.

With a selection of off-road features, seven driving modes (standard, sport, eco, snow, sand, mud/rut, and tow) the new Pathfinder should be able to live up to its name. Nissan revealed to journalists in a roundtable, though, that off-roading wasn’t the primary focus of the SUV.

The company said that its idea of adventure includes both trails and the Home Depot parking lot with a couple of kids in the back. As a result, the Pathfinder can hold a 4×8 sheet of plywood between the wheel wells, it can seat up to eight (unless you opt for the second-row captain’s chairs) thanks to its three-abrest third-row bench, and it can tow up to 6,000 lbs for all your weekending needs.

To make sure that all eight-passengers are well served, there are USB ports throughout the cabin and in all three rows. And for once you’ve arrived, the Pathfinder‘s cargo area and hold a 120-quart cooler or four golf bags without so much as lowering a single row.

Cloth, leather, or quilted semi-aniline leather-appointed seats are all offered and you can finish your Pathfinder in a number of shades to make sure the interior is as pretty as the outside. Whether or not you even notice the seats when you have an available 9-inch infotainment screen and a digital instrument cluster of up to 12.3-inches will have to be seen, though.

Nissan says it has also made big improvements in NVH thanks to acoustic laminated glass, thicker second-row windows, and increased door and floor insulation. That leads to a 60% increase in absorption of engine noise. 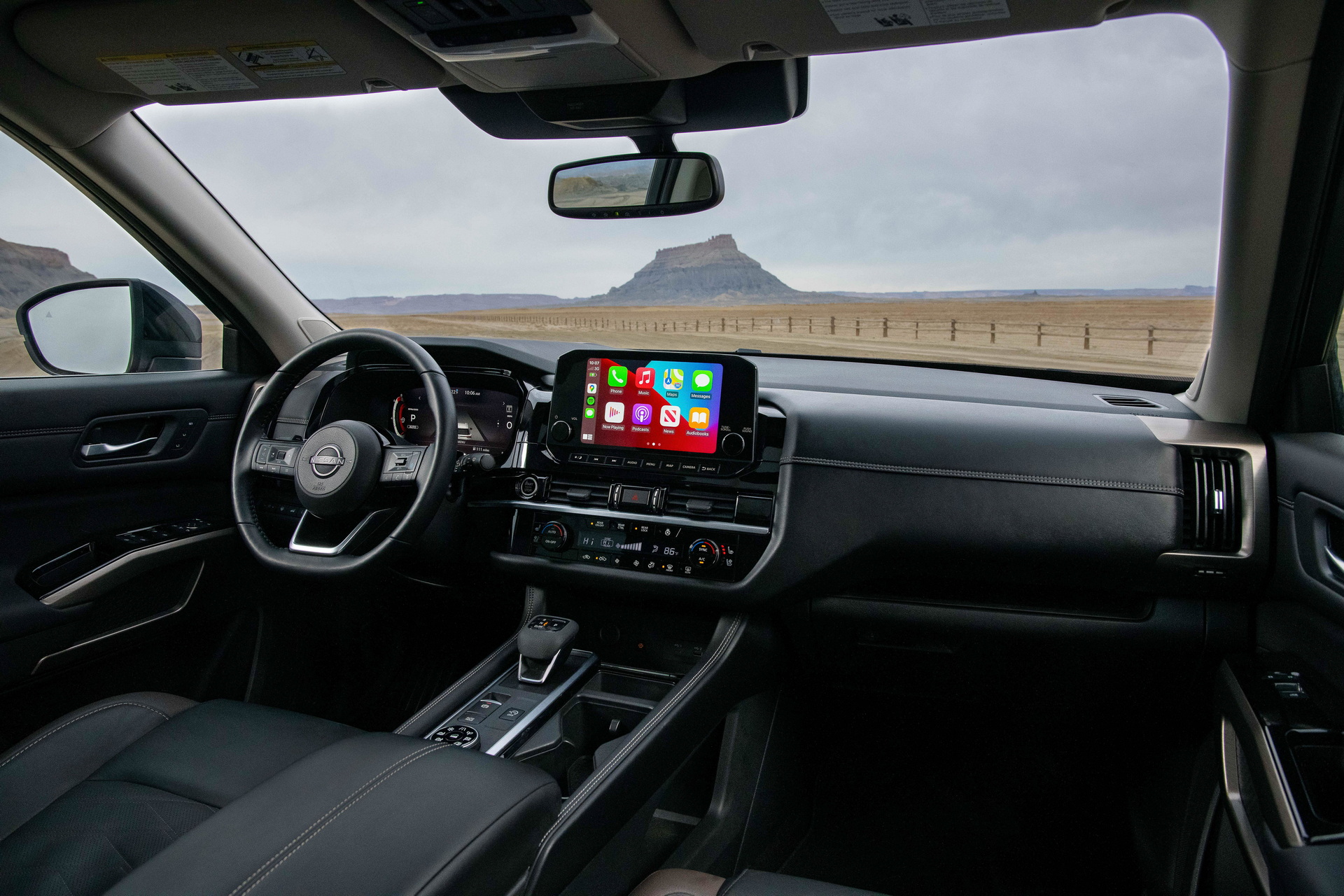 You can then fill the cabin back up with as much noise as you want thanks to the 13-speaker optional Bose sound system. Apple CarPlay and Android Auto as well as NissanConnect are also standard.

The Pathfinder will also be available with ProPILOT Assist on S and SV trims. The system combines steering assistance with adaptive cruise control that actually looks, not just at the car ahead of you, but also the car ahead of it to help control acceleration and deceleration.

Like the Frontier that was also revealed today, the Pathfinder is based on a heavily revised version of the existing platform. At 1.5-inches shorter, 0.5 inches wider, and 0.5 inches shorter, it is a genuine revision, though.

With a bunch more interior volume, though, the Pathfinder could spell trouble for even larger competition. And with two-tone paint jobs available, it should look great as well.

More details, including pricing, are expected closer to when deliveries start, which should be this summer.