NASA’s mix of Earth-observing satellites and instruments on the ISS have captured some views of the Earth during the year 2020.

Advertisement
On 3 July 2020, NASA’s Landsat 8 captured this image of the river near Rosario which is a key port city in Argentina. A prolonged period of hot weather and drought in southern Brazil, Paraguay, and northern Argentina has caused a drop in water levels in the Paraná River, and it is at its lowest levels in decades. With Rosario serving as the distribution hub for Argentina’s exports, low water levels have caused hundreds of millions of dollars in losses and due to the drought, many vessels have had to reduce their cargo in order to navigate the river. Image Credits: NASA Earth Observatory images by Lauren Dauphin 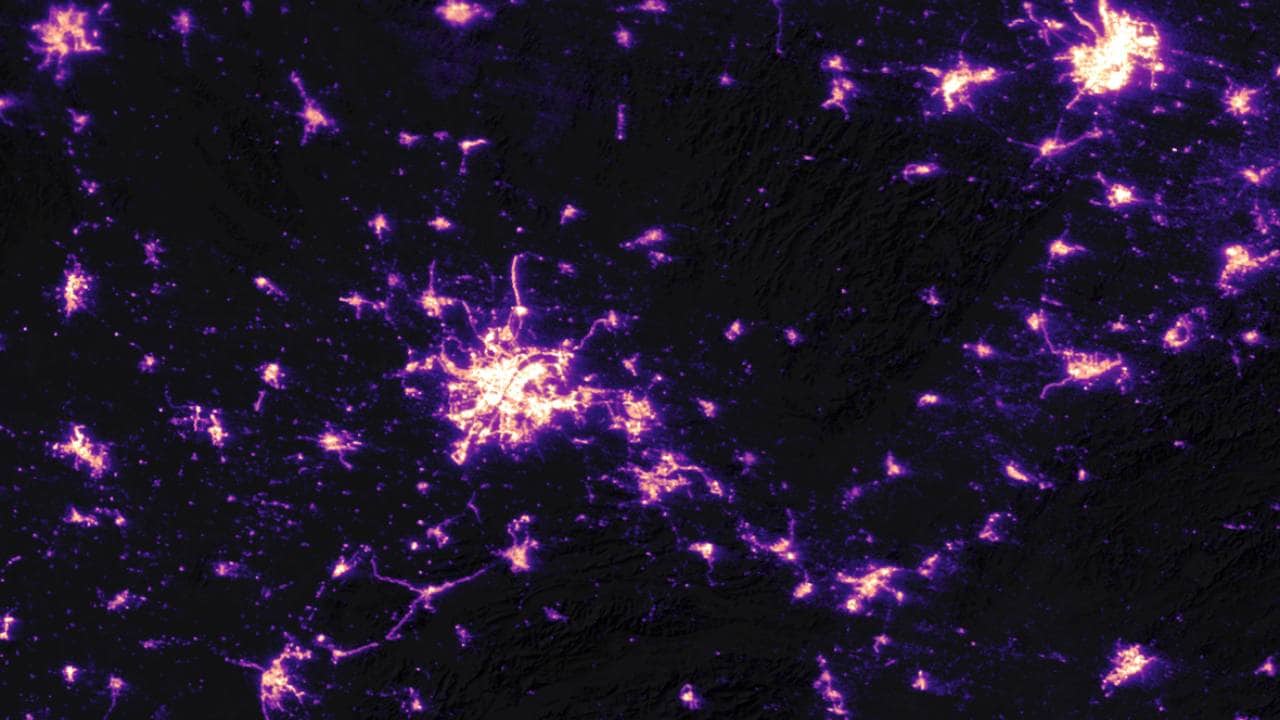 Chinese authorities suspended air, road, and rail travel in Hubei province and placed restrictions on other activities in late January 2020 in response to the COVID-19 outbreak. A before and after comparison by a team from NASA’s Goddard Space Flight Center and Universities Space Research Association detected signs of the shutdown of activity around the city of Wuhan, China, between 19 January and 4 February 2020. This before photo clearly depicts densely occupied roads and highways that are undetectable post-shutdown. Image Credits: NASA Earth Observatory images by Joshua Stevens At the start of 2020, daytime seemed to turn to night as thick smoke filled Australian skies and intense wildfires drove people from their homes. This natural-colour image of Southeastern Australia was acquired on 4 January 2020, by NASA’s Aqua satellite. The smoke has a tan colour, while clouds are bright white. Image Credits: NASA Earth Observatory image by Joshua Stevens, using MODIS data from NASA EOSDIS/LANCE and GIBS/Worldview Seen from space, the icy Ili River Delta contrasts sharply with the beige expansive deserts of southeastern Kazakhstan. On 7 March 2020, the Landsat 8 acquired this natural-colour image of the delta was just starting to shake off the chill of winter. While many of the delta’s lakes and ponds were still frozen, the ice on Lake Balkhash was breaking up, revealing swirls of sediment and the shallow, sandy bed of the western part of the lake. Image Credits: NASA Earth Observatory images by Joshua Stevens, using Landsat data from the U.S. Geological Survey 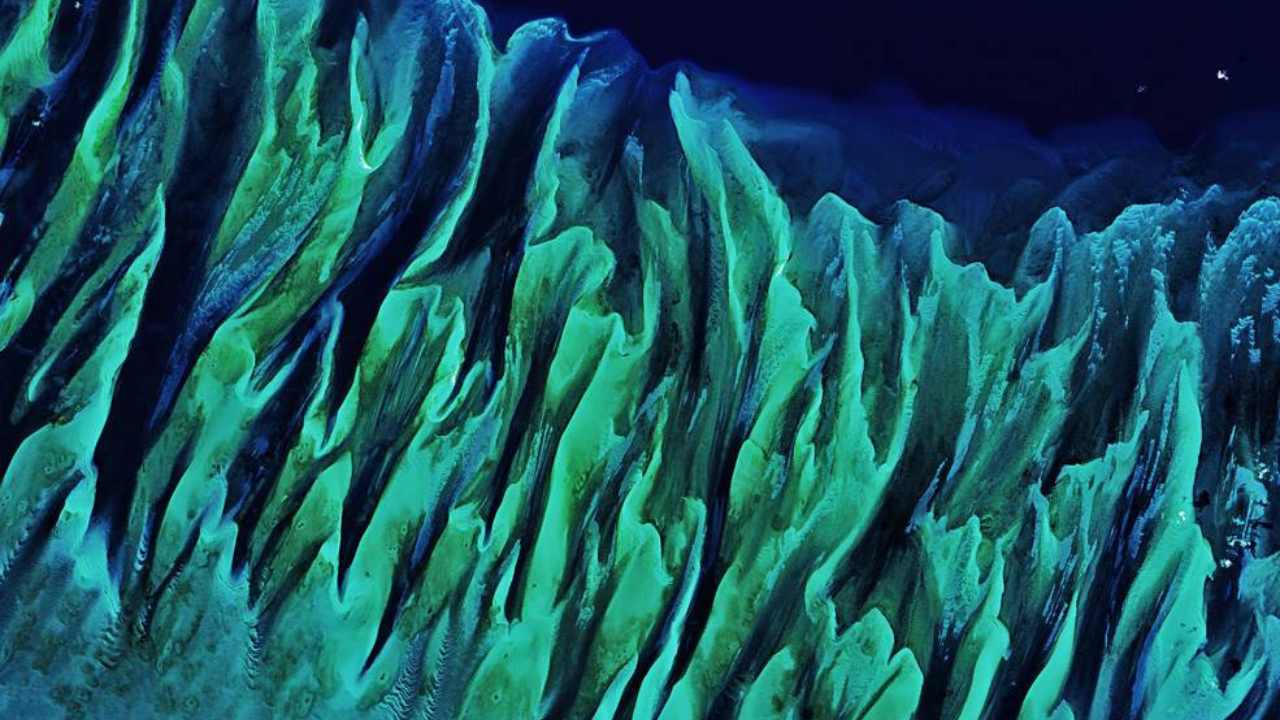 This is an underwater masterpiece photographed from above is the Great Bahama Bank and was dry land during past ice ages, but it slowly submerged as sea levels rose. Today, the bank is covered by water, though it can be as shallow as two meters deep in places. The bank itself is a combination of white carbonate sand and limestone, mainly from the skeletal fragments of corals. The wave-shaped ripples in the image are sand on the seafloor. The curves follow the slopes of the dunes, which were likely shaped by a fairly strong current near the sea bottom. Sand and seagrass are present in different quantities and depths, giving the image it’s a striking range of blues and greens. Image Credits: NASA Earth Observatory images by Joshua Stevens 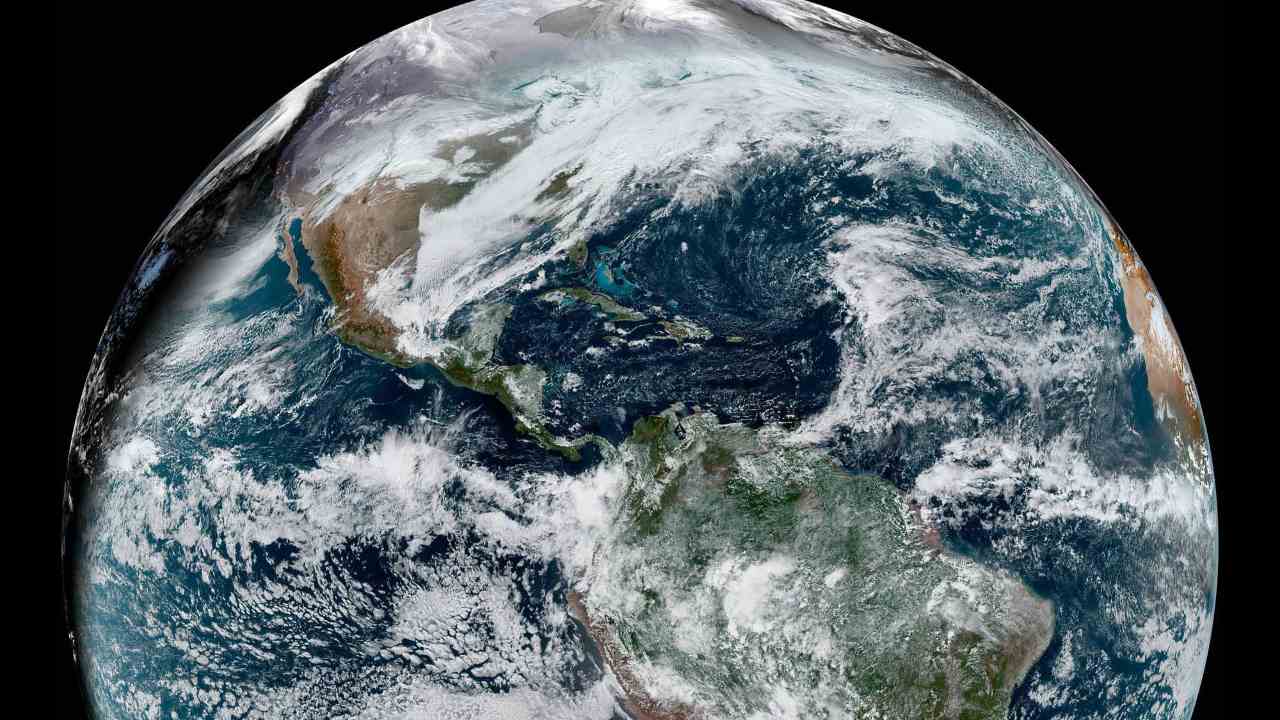 The first and only total solar eclipse of 2020 occurred on 14 December 2020, with the path of totality stretching from the equatorial Pacific to the South Atlantic and passing through southern Argentina and Chile as shown in the lower half of the image above. The Geostationary Operational Environmental Satellite 16 captured these images of the Moon’s shadow crossing the face of Earth. Image credits: NASA 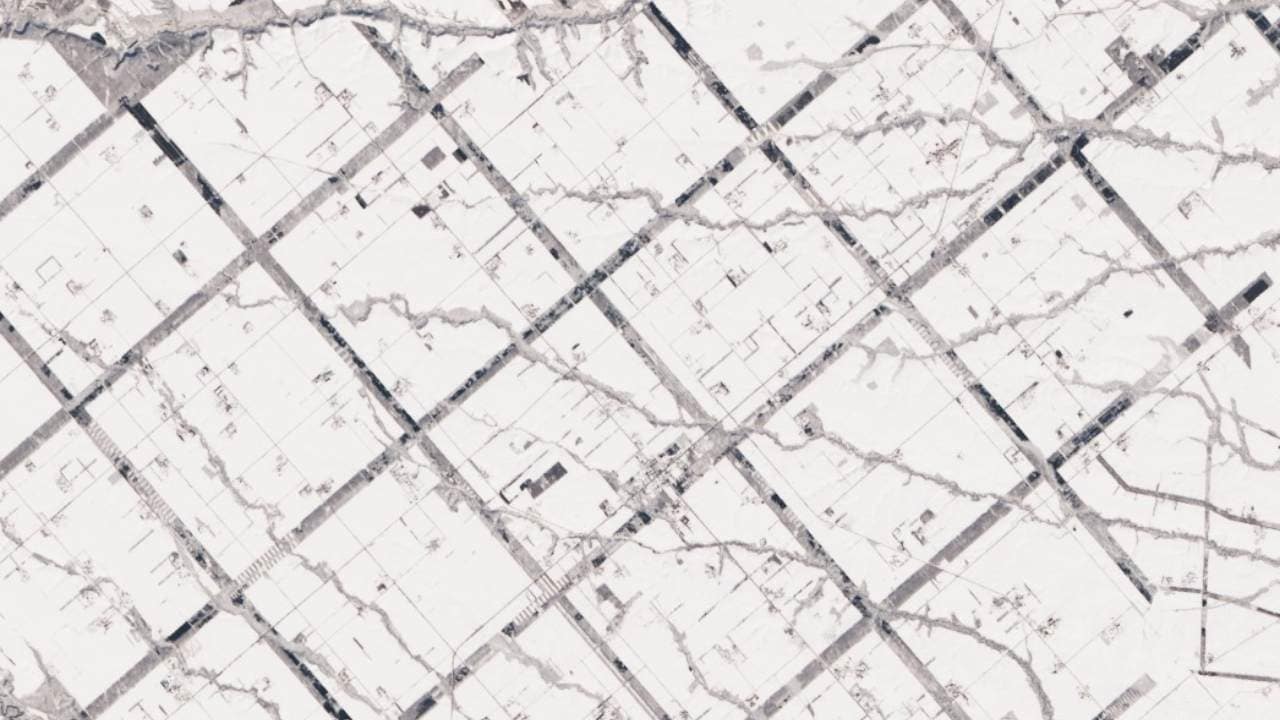 From above, the Konsen Plateau in eastern Hokkaido offers a remarkable sight: a massive grid that spreads across the rural landscape like a checkerboard, visible even under a blanket of snow. Photographed by the Landsat 8, this man-made design is not only aesthetically pleasing, but it’s also an agricultural insulator. The strips are forested windbreaks—180-meter wide rows of coniferous trees that help shelter grasslands and animals from Hokkaido’s sometimes harsh weather. In addition to blocking winds and blowing snow during frigid, foggy winters, they help prevent winds from scattering soil and manure during the warmer months in this major dairy farming region of Japan. Image credits: NASA Earth Observatory images by Lauren Dauphin NOAA-20 captured this image of Hurricane Laura at 2:20 a.m. Central Daylight Time on 26 August 2020. It was one of the ten strongest hurricanes to ever make landfall in the United States. The eye of the storm touched down in a sparsely populated area just east of Calcasieu Ship Channel. Forecasters had warned of a potentially devastating storm surge up to six meters along the coast, and the channel might have funnelled that water far inland. It did not. Image Credits: NASA Earth Observatory images by Joshua Stevens The folded mountains of central Pennsylvania were past peak leaf-peeping season but still colourful when the Landsat 8 satellite passed over on 9 November 2020. The region of rolling hills and valleys is part of a geologic formation known as the Valley and Ridge Province that stretches from New York to Alabama. These prominent folds of rock were mostly raised up during several plate tectonic collisions and mountain-building episodes in the Ordovician Period and later in the creation of Pangea—when what is now North America was connected with Africa in a supercontinent. Those events created the long chain of the Appalachians, one of the oldest mountain ranges in the world. The Appalachians once stood as tall at the Rockies and Alps, but hundreds of millions of years of erosion have worn them down. Image Credits: NASA Earth Observatory images by Joshua Stevens, 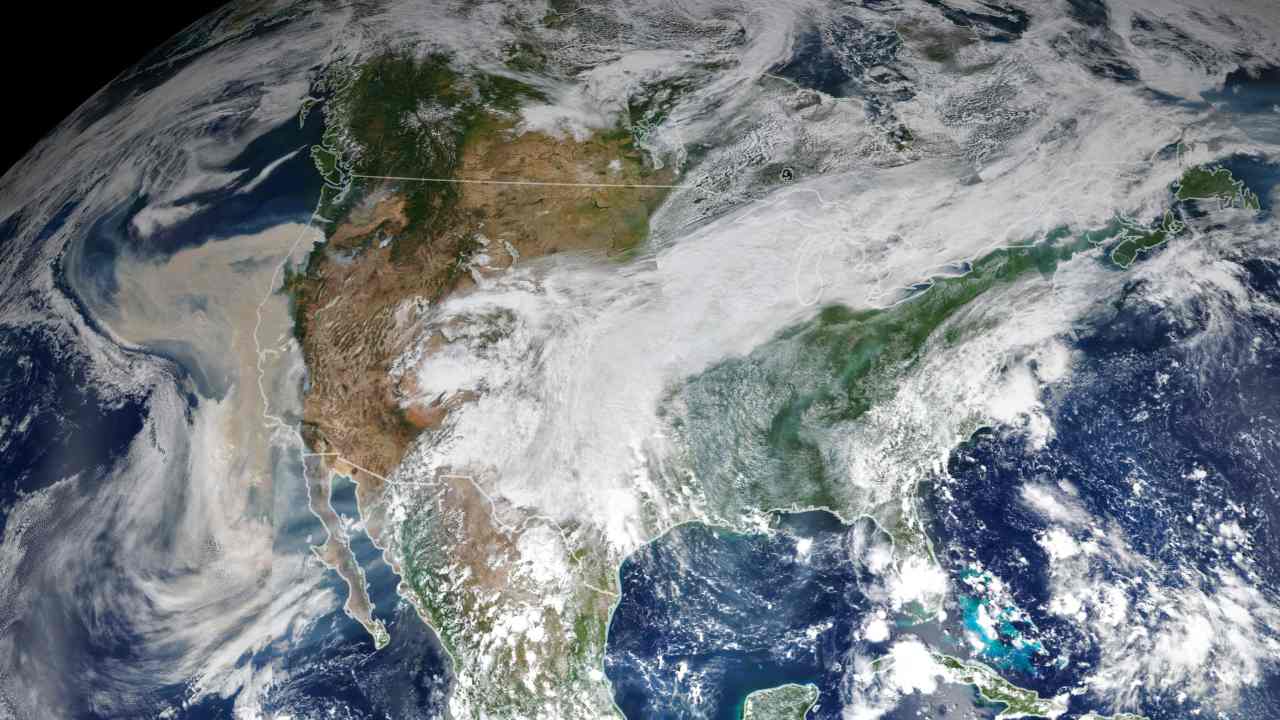 Climate and fire scientists have long anticipated that fires in the U.S. West would grow larger, more intense, and more dangerous. Lightning initially triggered many of the fires, but it was unusual and extreme meteorological conditions that turned some of them into the worst conflagrations in the region in decades. This image shows North America on 9 September 2020, as a frontal boundary moved into the Great Basin and produced very high downslope winds along the mountains of Washington, Oregon, and California. The winds whipped up the fires, while a pyrocumulus cloud from the Bear fire in California injected smoke high into the atmosphere. The sum of these events was an extremely thick blanket of smoke along the West Coast. Image Credits: NASA Earth Observatory images by Joshua Stevens
← Previous Post
Next Post →