Remember mobile phones in the ‘90s? They kept getting smaller and smaller, to the point that they became a meme of sorts (which didn’t exist in the ‘90s). You also paid a premium for that sort of miniaturisation, and the smaller ones tended to be more premium in materials as well. A far cry from today’s phablets masquerading as phones. I, for one, would appreciate a bit of a throwback with a nice, small phone like the iPhone Mini, even if my eyesight no longer complies with its demands.

Thankfully, midlife has done little to my mid-section, and I continue to maintain the body of a 14-year-old girl. This means that small cars with potent motors are definitely my jam. That’s exactly what the new(?) Audi Q2 is — compact, fun with a 190PS four-cylinder motor that moves it with alacrity. In case you were wondering about the question mark, that’s because the ‘new’ Audi Q2 already has a facelift coming to the international market. That’s not going to do any favours for the India sales of this already very, very niche car.

An excellent question to answer, if the less charitable comments on my Instagram are any indication. The Audi Q2 is a small, 4.2m-long crossover that really looks a lot like a hatchback with a bit of a lift. It comes in below the Q3 — as the name implies — and looks quite different from the SUV lineup that the company sells in India. If you’re looking for equivalents, don’t bother: there aren’t any, at least as far as this segment goes. You’d probably shop this against Mini Coopers. 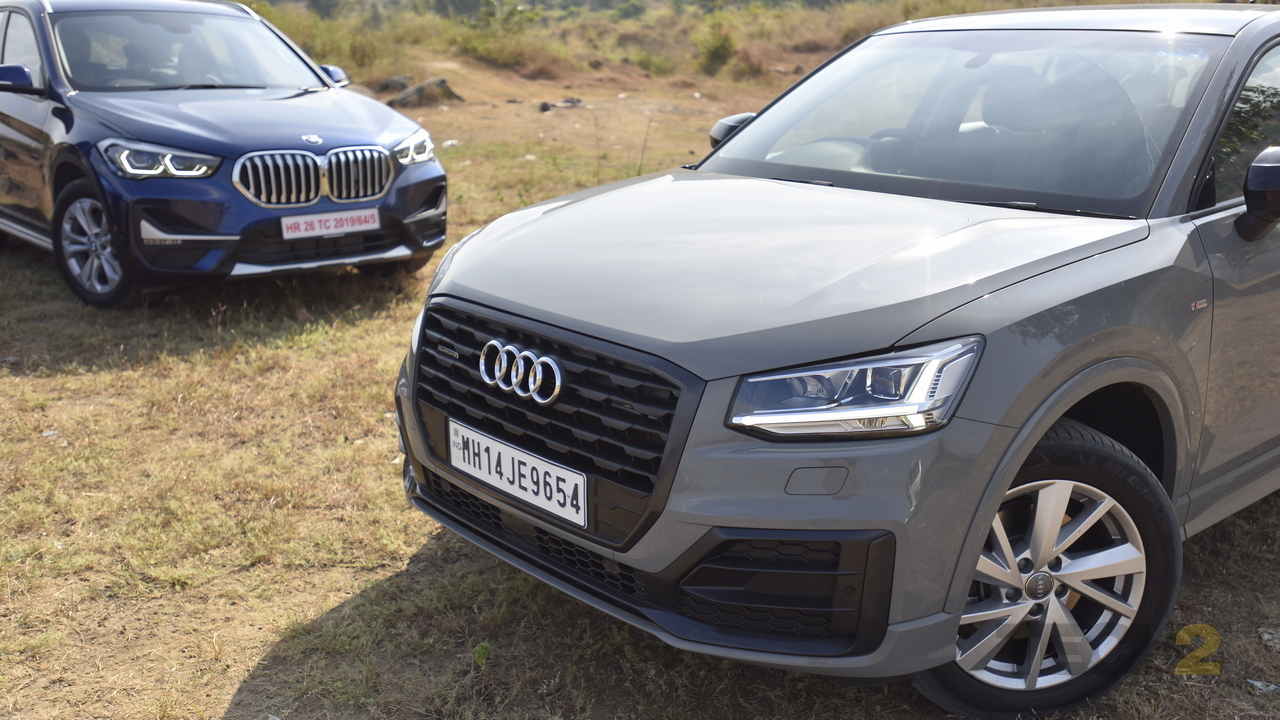 The Audi Q2 is a small, 4.2m-long crossover that really looks a lot like a hatchback with a bit of a lift. Image: Tech2/Tushar Burman

I’ll give the Q2 one thing: it’s unique by default. In terms of where it is in the lineup, what it comes (or doesn’t come) with and what it looks like. It’s an angular, sculpted design language that I really like, but it does not really attract attention. It’s quite conservative in its overall visage — another point that may not go down well with potential buyers.

Being this small, it’s based on the MQB platform that’s shared across VW group cars such as the Octavia, Polo, Karoq and many others. It’s also the smallest way you can get Quattro all-wheel drive in a vehicle. Naturally, space is at a premium for rear passengers, though the boot is okay at 405 litres. My colleagues seem to think that the rear knee room is good, but it did not look that way for my driving position.

A word about equipment

Being a last-generation Audi, you may be a bit taken aback with the interior. Sure, it feels nice and the materials are good. But it does feel sparse. The infotainment system is Audi’s MMI unit that you control with a click-wheel. No touchscreen here. The virtual cockpit screen is present for the driver, but it’s not like the more recent Audis. About the only thing that I was able to be grateful for was the wireless charger in the armrest storage area. But there’s only wired Apple CarPlay/Android Auto, so that’s also not exactly elegant. There are USB-A ports in the front, but USB-C for the rear passengers, which is baffling.

Being a last-generation Audi, you may be a bit taken aback with the interior. Image: Tech2/Tushar Burman

Perhaps the most egregious omission is powered seats. I’m not even asking for ventilation here, but really? Grab a spring-loaded handle and tug myself to comfort? For Rs 60 lac?

Not everyone, that’s for sure. Even in the rarified space of the luxury car buyer, this would be a very difficult purchase as a second or third flash runabout. At nearly Rs 60 lac on-road for the top-spec model we drove, there’s not much in it. At all. It’s not like you have to make a couple of excuses here and there. No, it’s really quite bare for that sort of money.

At nearly Rs 60 lac on-road for the top-spec model we drove, there’s not much in it. At all. Image: Tech2/Tushar Burman

My best guess is that the Audi Q2 is for a younger crowd that needs the practicality of a small car/crossover, the prestige of a luxury German badge, the potency of a hot hatch and owns all the patents on all the upcoming COVID-19 vaccines. And has a backup vehicle to carry more than six doses.

On the go: never mind, this will do

If you’re all about the driving feel, ignore everything you’ve read so far. The Audi Q2 is fun to drive, easy to squeeze through traffic, comfortable to park and not very nerve-wracking to leave parked on the street. Evidently, the hissy-fit I threw the last time Audi sent me a car for less than 24 hours had some effect. This time round, I had the Q2 for two whole nights. Enough to show myself and some lucky passengers a bit of the city.

The Audi Q2 is fun to drive, easy to squeeze through traffic, comfortable to park and not very nerve-wracking to leave parked on the street. Image: Tech2/Tushar Burman

For the driver and front passenger, the Q2 is fine. It’s just that it doesn’t feel any larger than my Polo, which costs less than a tenth. But that’s just my desi mindset kicking in. The seats up front are comfortable, visibility is good and I got a bit of a kick out of driving such a tiny Audi. I had my doubts about the headroom for those with longer torsos, but this turned out to be misplaced. There’s plenty of room unless you’re very tall.

In brief, I like it. I like this motor. I’ll probably like a rickshaw with this motor. I think I just had an idea. Image: Tech2/Tushar Burman

The Q2’s petrol motor is familiar and used in several other cars sold in India. It’s very smooth, linear and pairs well with the 7-speed S Tronic DSG gearbox it comes with. Shifts aren’t super-quick, but they’re acceptable. Driving modes are available that quicken responses and putting the gearbox into ‘S’ mode perks things up even more.

Driving modes are available that quicken responses and putting the gearbox into ‘S’ mode perks things up even more. Image: Tech2/Tushar Burman

By nature of the Q2 being more hatch than SUV, things feel very tight and controlled. In our exclusively city runs, we found no complaint with the way it felt around bends. I’m sure Quattro will hold this car in good stead in ghat sections. I didn’t notice any torque steer when I tried to behave badly, so the all-wheel drive must have been doing its thing. Suspension is a sore point for me. I do not understand why the VW group insists on giving us Euro-spec suspension for lunar landscape roads. The Q2 rumbles over everything but the most pristine Tarmac. I know it’s always a trade-off between sportiness and comfort, but this does not feel sophisticated, and I’m never comfortable pushing a car when I think one pebble might cause me to change lanes.

Space is at a premium for rear passengers, though the boot is okay at 405 litres. Image: Tech2/Tushar Burman

With the light weight (1.4 tonnes) and potent 190PS/320Nm motor, I expected a bit more chhapri in this baby Audi. Sadly, the Q2 remains poised most times, and I only managed to slightly scare one coworker who has little experience with quick cars. The rest of my passengers maintained a diplomatic silence anyway, when I told them what the car cost. There’s enough poke to move the car forward with authority, and enough feel that you don’t destroy the speed limit without noticing.

Should you buy it?

The Audi Q2 has enough swag for a relatively sophisticated gent, the small size and practicality for those who value these things, but starting at Rs 35 lac and going all the way up to Rs 49 lac ex-showroom, it’s a tough sell. For the money, you get a fully-imported entry-level luxury car that has no peers and not much by way of equipment. Can you window shop this against something else? Heck yes, plenty! A Skoda Kodiaq, a Mini Cooper, even a Mercedes C Class, in diesel no less.

But I’m the kind of idiot that would probably get a kick out of telling people that I spent Rs 60 lac on a hatchback. And there’s enough space to carry COVID-19 vaccine.