Crossovers dot the landscape, but that didn’t happen overnight as rough-and-tumble SUVs slowly gave way to their more comfortable and car-like replacements.

However, in the past few years, off-road focused models have experienced something of a rebirth. While the Wrangler has never left us, Ford is bringing back the Bronco and GM has resurrected the Hummer.

They aren’t the only ones returning to their off-road roots, as Land Rover has launched an all-new Defender. While the old model developed a cult-like following, it left the United States in 1997 and went out of production altogether in 2016.

The Defender is now back and better than ever as it manages to embrace the ideals and capability of its predecessor, while also being far more comfortable and high-tech. 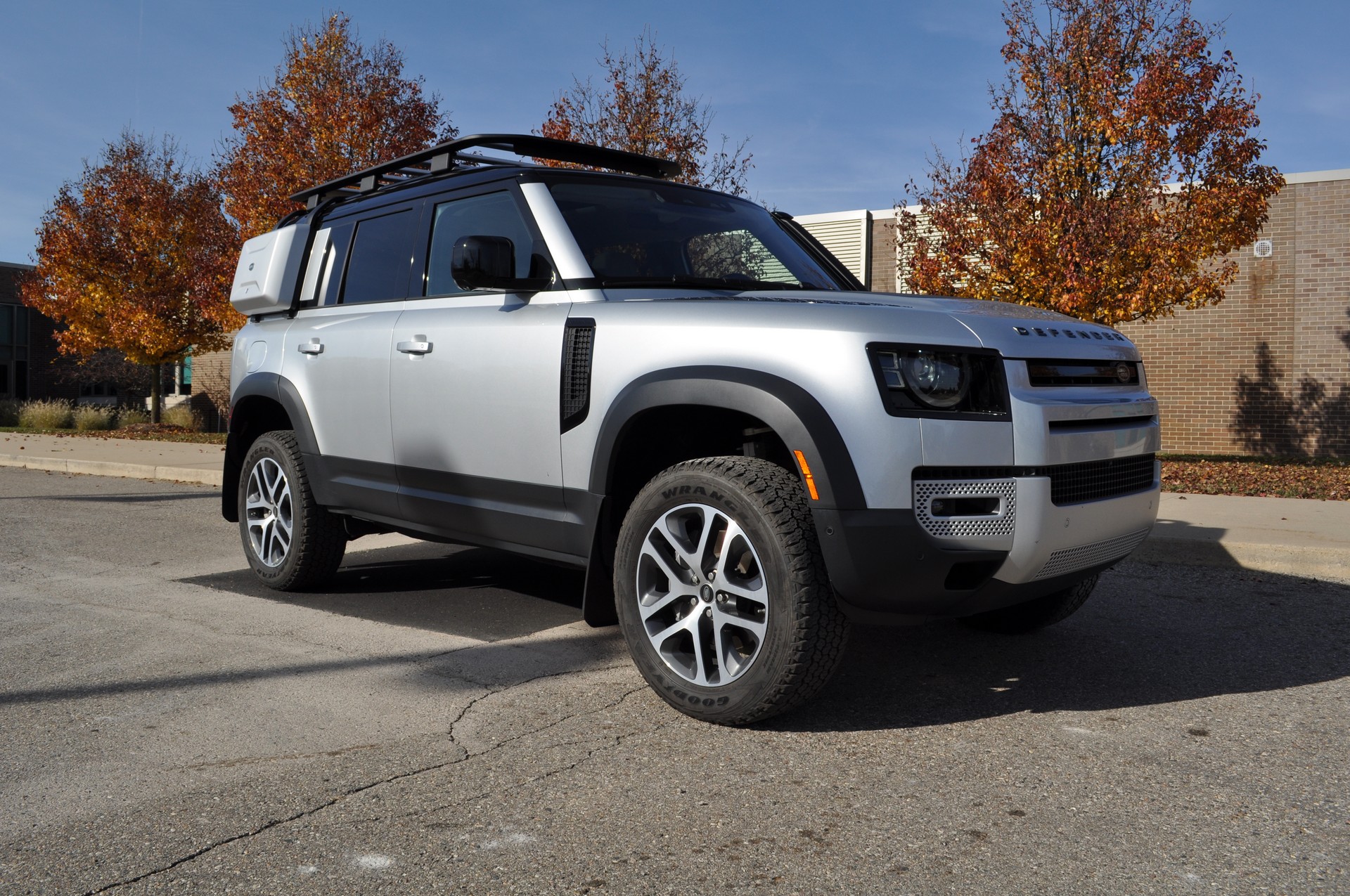 Resurrecting an icon is never easy as designers have to balance incorporating cues from the past, while also making a thoroughly modern vehicle that is unique in its own right.

Thankfully, Land Rover has nailed it as the Defender is instantly recognizable despite being an entirely new beast. Cues from its predecessor are abound, but not overwhelming as the 2020 model has a nearly vertical fascia with semi-circular headlights. It also sports an upright windscreen, front fender vents and a pronounced shoulder line which recalls the one used on the old model. However, the coolest touch remains the Alpine windows which are mounted on the sides of the roof and help to brighten up the cabin. 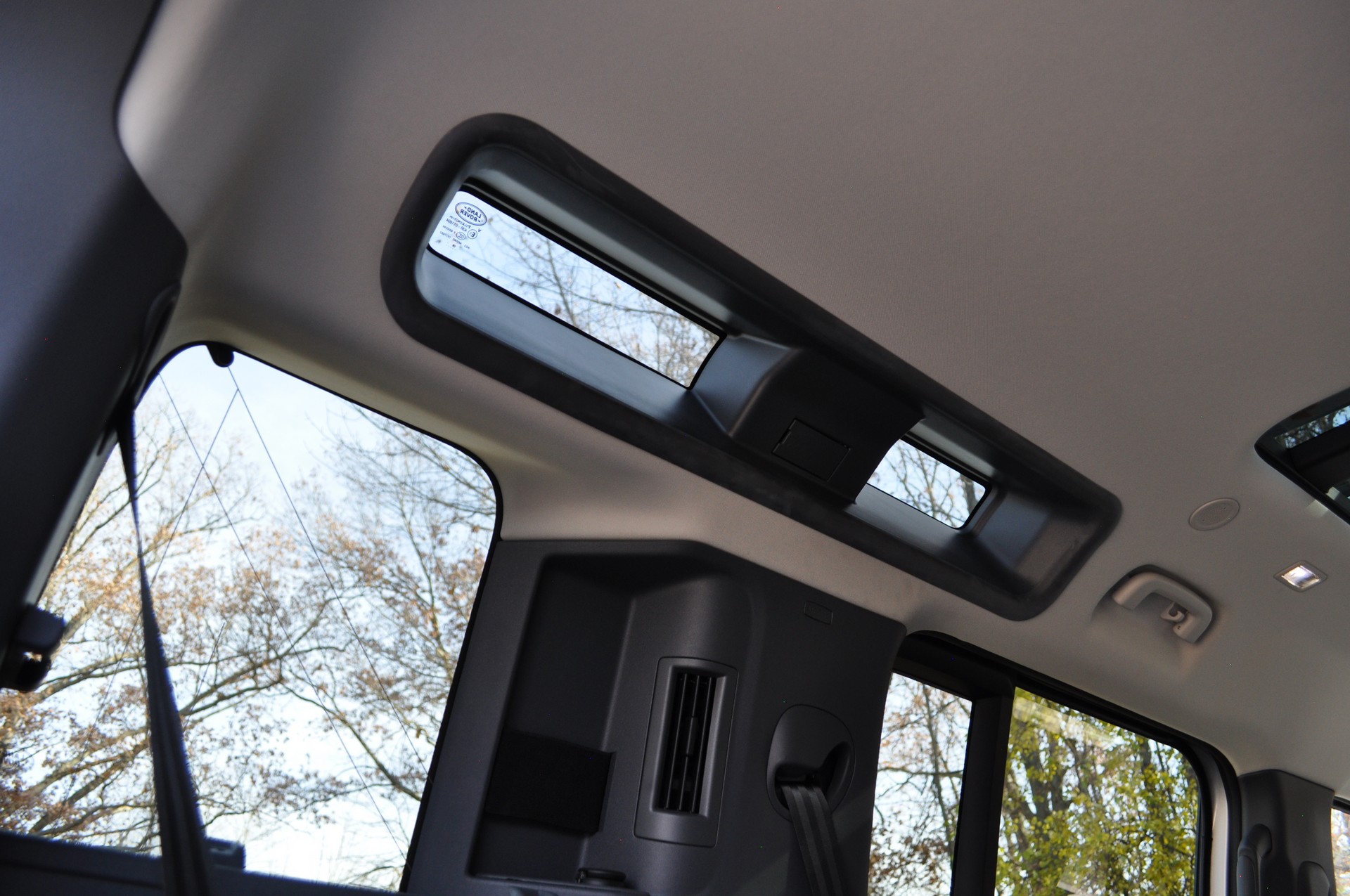 The old school touches continue at the back as there’s a side-opening door with a rear-mounted spare tire. Even the taillights are minimalist like the original’s, but they’re modern LEDs with a three-dimensional design.

While the Defender looks great in standard form, Land Rover offers an assortment of packages that make the SUV look even more rugged. The most interesting of the bunch is the Explorer Pack which includes a roof rack, a raised air intake, extended fender flares, and a side-mounted cargo carrier that’s lockable and waterproof. The package also adds a matte black hood decal, mud flaps and a stylish spare tire cover.

Thanks to an extensive lineup of packages and individual options, it’s easy to create a rugged Defender straight from the factory. 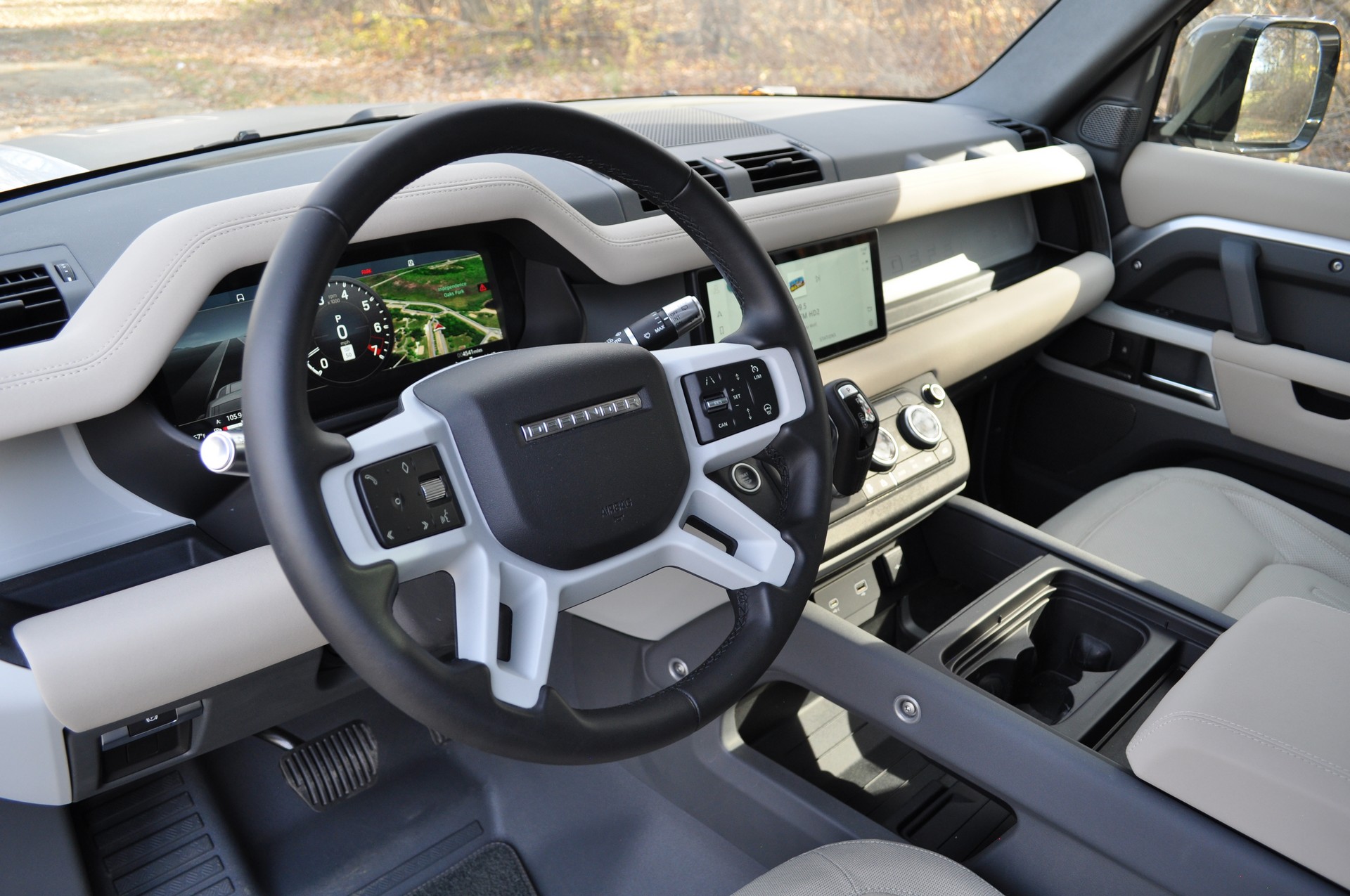 From the moment you open the hefty driver’s side door, one thing is immediately apparent: the Defender is built like a tank. Everything feels solid and substantial, and ready to withstand years of use and abuse.

You’ll also discover the all-new Defender doesn’t follow the traditional luxury blueprint as there are exposed screws, heavy duty plastics and minimal trim. Base models also eschew leather for fabric, while the center console can be replaced by an optional jump seat.

Despite this, there are plenty of luxury options as the Defender can be equipped with Windsor leather front seats that feature heating and ventilation, a panoramic glass roof, wood trim, a digital rearview mirror and driver assistance systems such as adaptive cruise control. 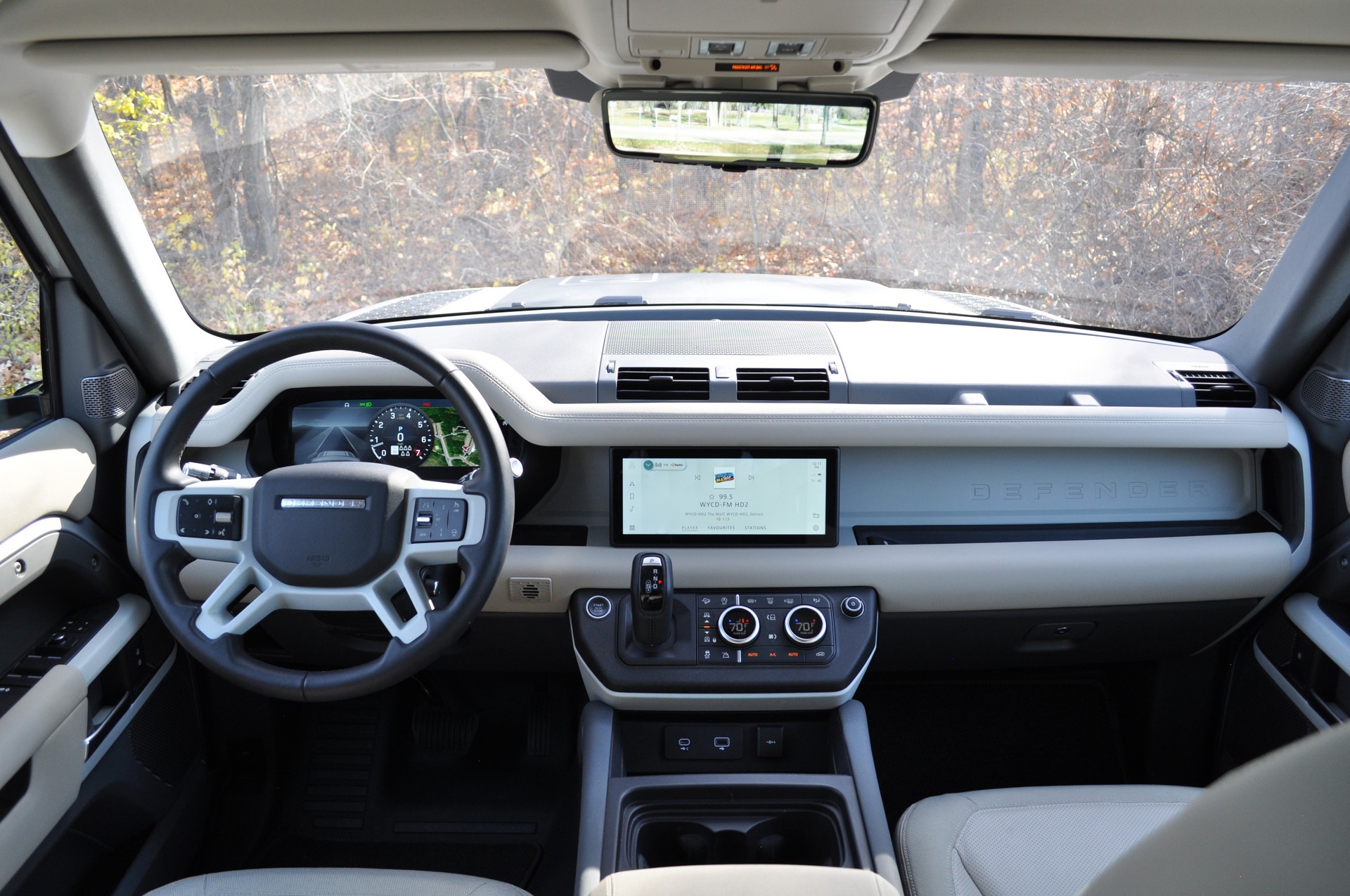 Our Defender SE tester sat near the middle of the lineup and featured firm but supportive leather / textile seats with heating and 14-way power adjustment. They’re impressively spacious and give you a commanding seating position where you effectively lord over everything below.

Sticking with the seats, the second row is spacious and can accommodate three adults in relative comfort. There’s 39.1 inches (993 mm) of rear seat legroom in the Defender 110, but that drops to 38.4 inches (975 mm) when the model is equipped with the optional third row. The latter isn’t powered, but is easy to fold up and down. Unfortunately, it only accommodates small children as there’s only 20.5 inches (521 mm) of legroom. Second-row passengers can slide their seats forward to provide a little more space but, even then, it’s best left to pre-teens. 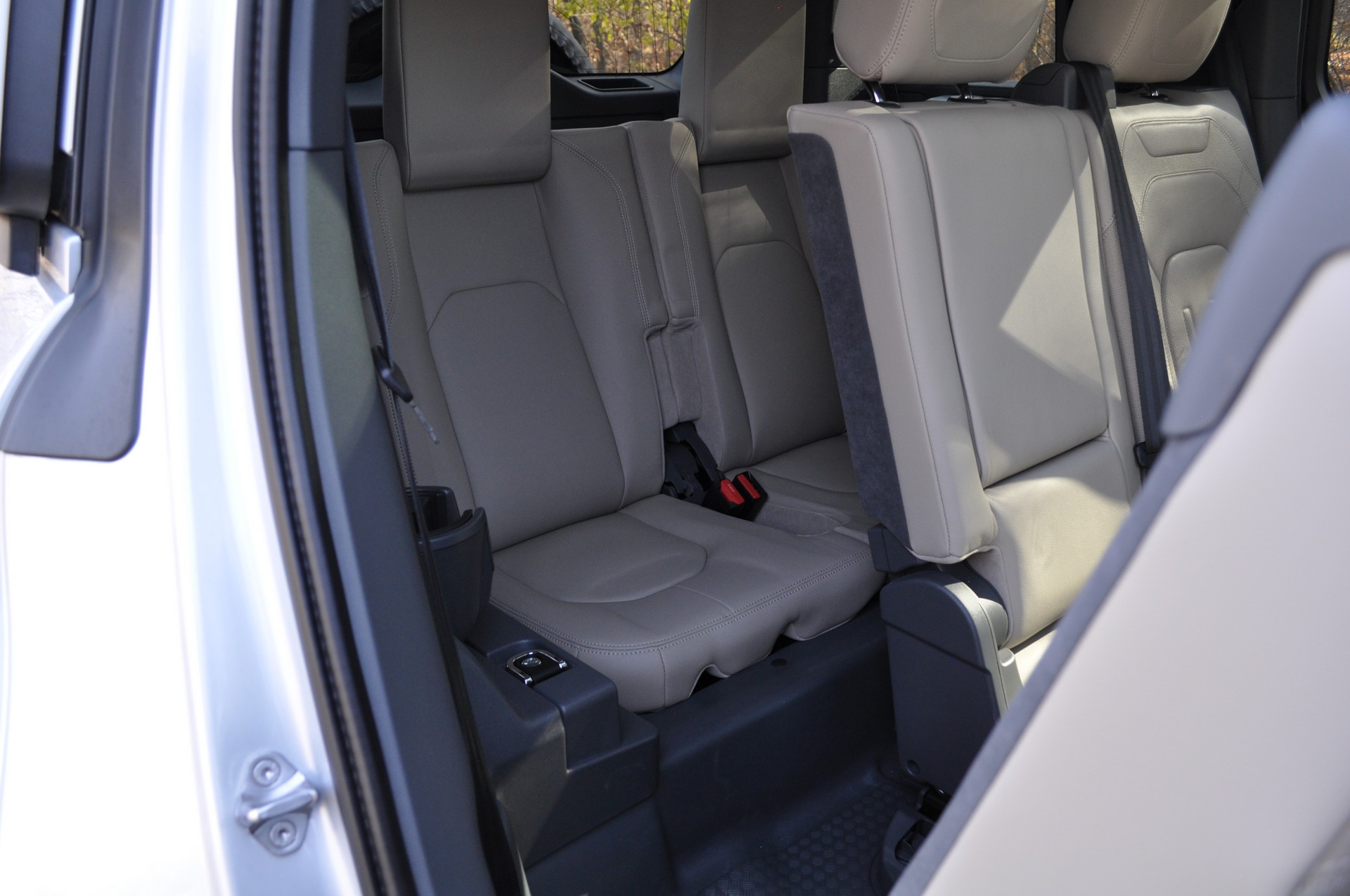 Despite the third-row’s limited potential, back seat passengers aren’t an afterthought as they’ll find cup holders, charging ports, storage areas and air vents. Customers can even order a heated third row to ensure their youngsters are comfortable on the chilliest of mornings.

The second row has a nice rubberized backing, but it doesn’t fold flat. That isn’t the only issue, as the cargo cover doesn’t retract or have a dedicated storage space. As result, it will likely spend most of its life gathering dust in a garage.

As for tech features, the Defender can be equipped with an optional 12.3-inch digital instrument cluster that’s highly customizable and allows drivers to select from single and dual gauge displays as well as a full map view. The single gauge option is the most useful as it combines a speedometer and tachometer into one, while leaving two outer sections that can show a map, trip information and entertainment data, among other things.

Drivers will also find a 10-inch PIVI Pro infotainment system which is far more powerful and streamlined than previous displays. However, while it is fast and responsive, it feels a bit basic. That being said, it provides easy access to a multitude of cameras including views which show a 3D rendering of the Defender in real time. 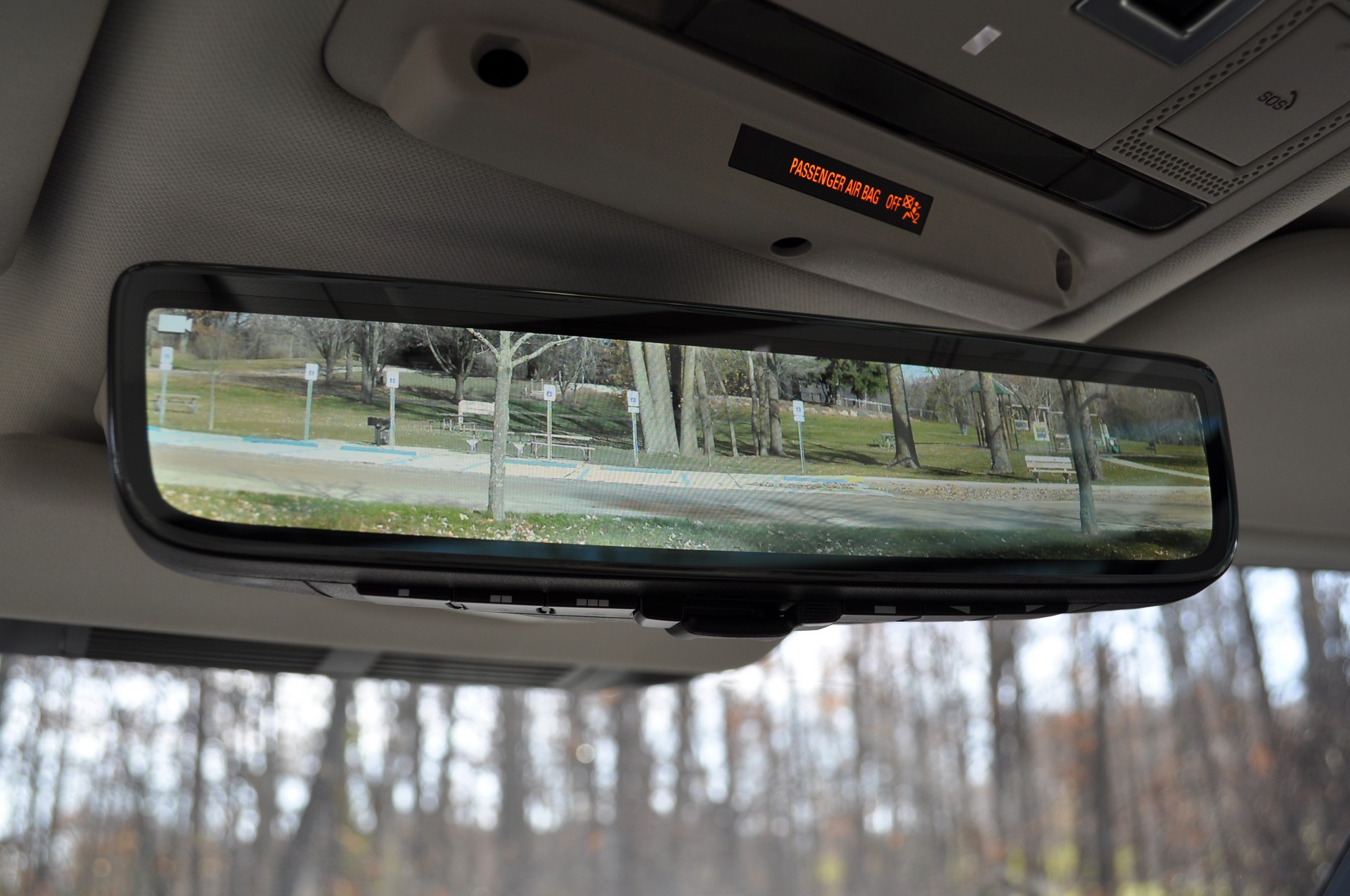 Speaking of cameras, higher end Defenders have a digital rearview mirror known as ClearSight Rear View that helps minimize visibility issues by allowing you to ‘see through’ the Defender’s sizeable headrests and rear-mounted spare tire. Land Rover also says it provides a 50-degree wider field of view than a traditional rear view mirror as well as “superior clarity in low light conditions.” It’s one of the less distracting digital rearview mirrors and I had no problem leaving it in digital mode continuously – and you can easily convert it back to a traditional rearview mirror if you wish.

One thing that’s not so great is the Defender’s stubby shifter. While it’s leather-wrapped and intuitive to use, I’d occasionally hit it while reaching for controls or using the infotainment system. This is relatively minor issue, but it’s annoying nonetheless.

It’s A Hybrid, But Certainly No Prius 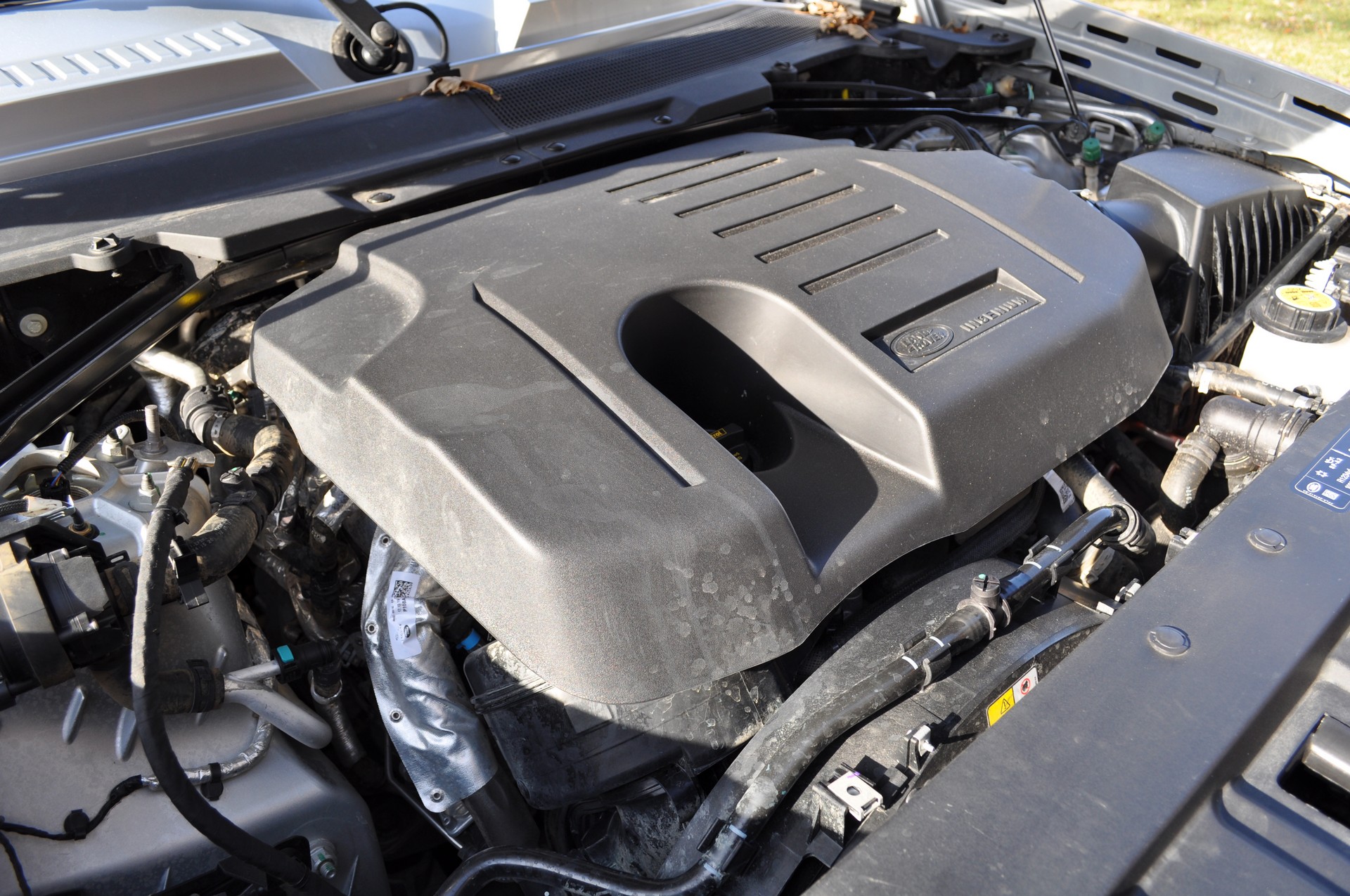 Our tester was equipped with the turbocharged 3.0-liter inline-six which features mild-hybrid technology as well as an electric supercharger. It also eschews an alternator for a starter motor that can provide an assist when accelerating. 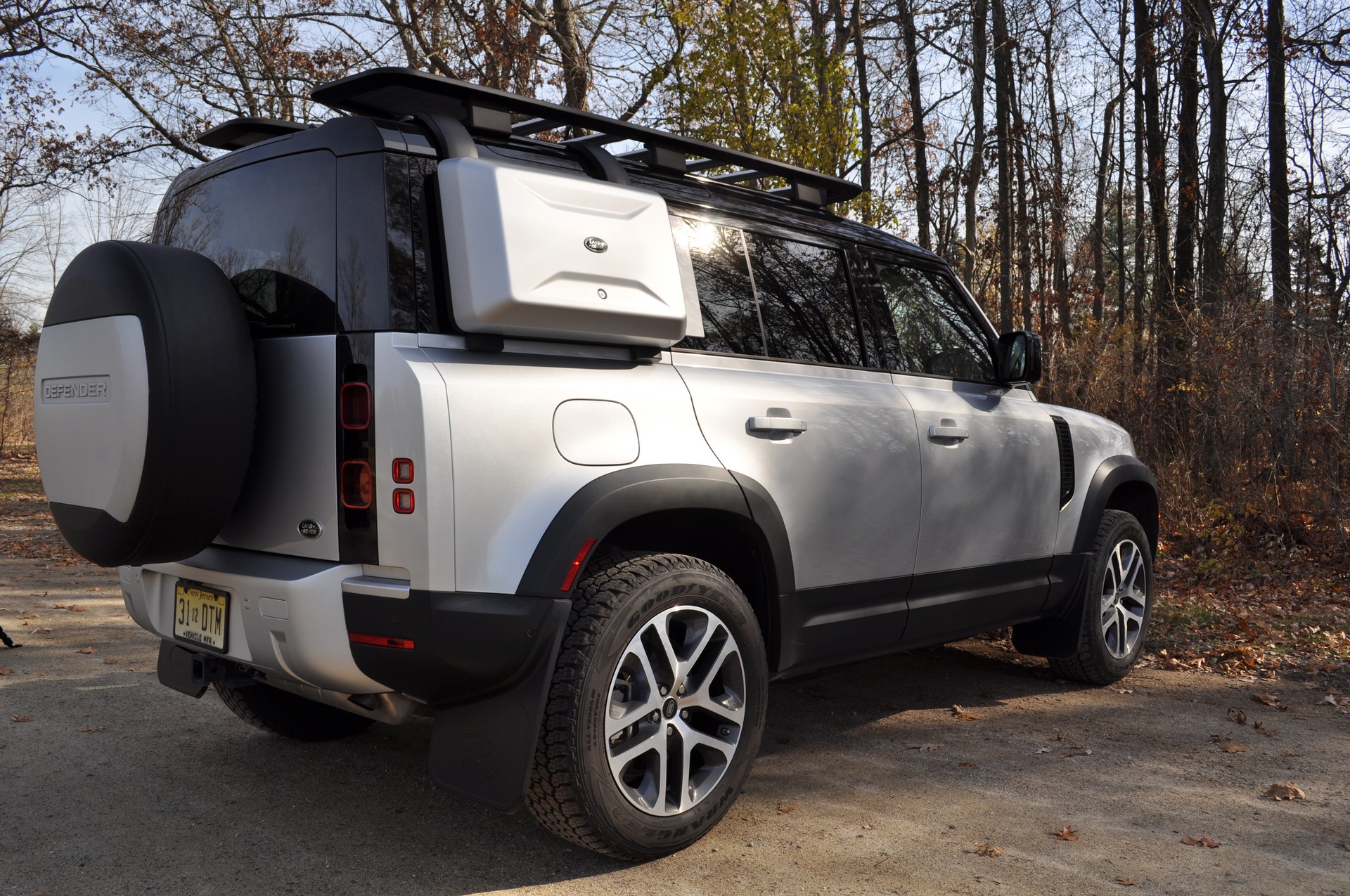 Given those numbers, it should come as little surprise the Defender is quick off the line despite the extra 220 lbs (100 kg) of weight that accompany the six-cylinder powertrain. The hybrid technology is also easy to overlook as it operates seamlessly and without fuss. It’s also worth mentioning the start/stop system is smooth as the engine turns on and off quickly and quietly.

Speaking of smooth, the eight-speed ZF automatic transmission is fast and responsive without being busy. It also delivers perfectly timed shifts, although there is a manual mode if that’s your thing.

Despite the mild-hybrid technology, fuel economy ratings aren’t impressive: the 3.0-liter Defender 110 has an EPA rating of 17 mpg city, 22 mpg highway and 19 mpg combined. During our week of testing we averaged 18.2 mpg, but that involved lots of idling, so owners can expect better results.

Interestingly, the 2.0-liter four-cylinder Defender 110 is less efficient as it’s rated at 17 mpg city, 20 mpg highway and 18 mpg combined. That’s not a huge difference, but all fill ups are costly as the Defender chugs premium gasoline. 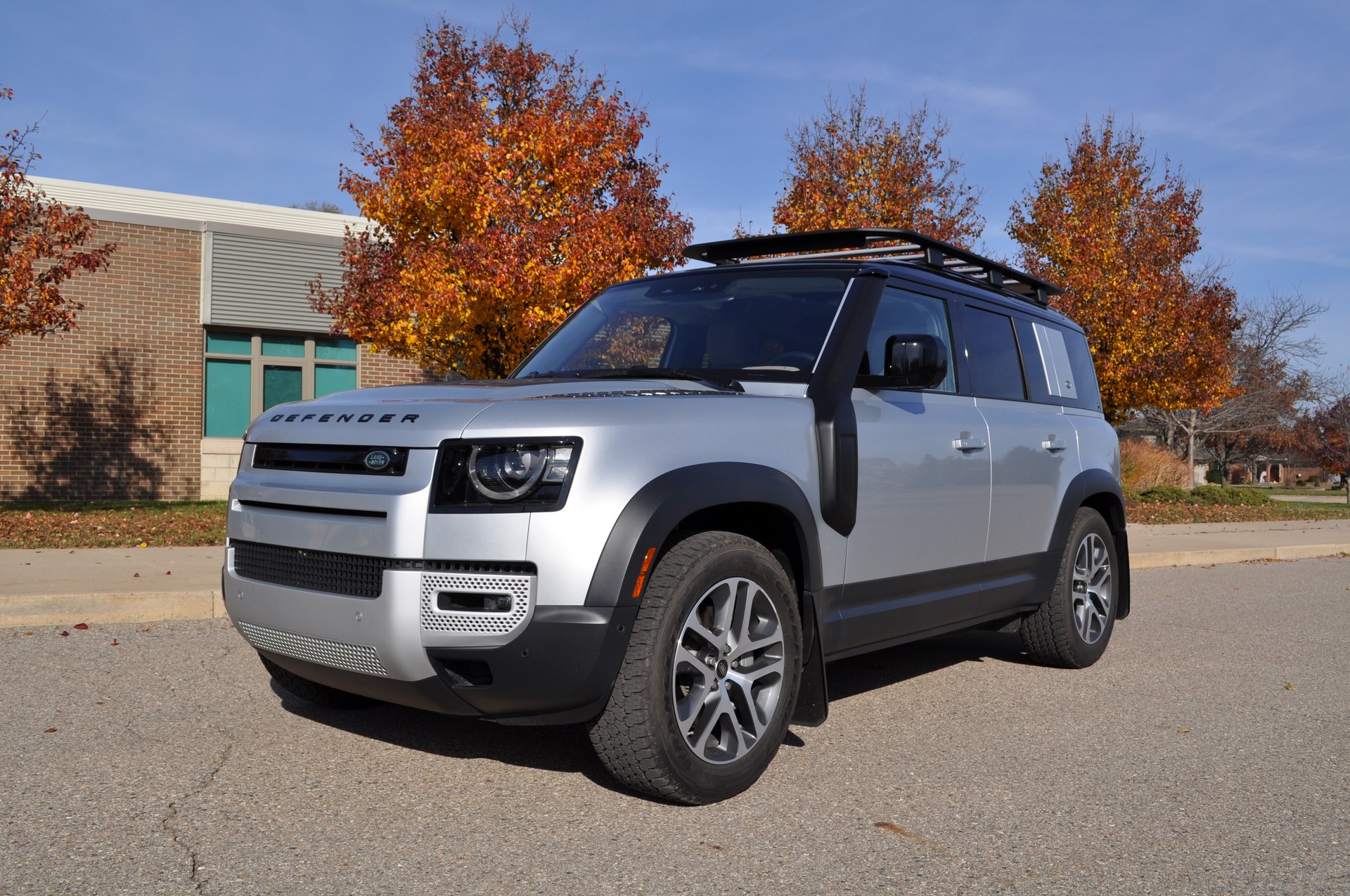 The Defender rides on the all-new D7x platform which features an all-aluminum monocoque. While some people consider body-on-frame vehicles the ‘real’ SUVs, the Defender has the stiffest body ever created by Land Rover and is “three times more rigid than traditional body-on-frame designs.” This helps to the make the model feel solid as a rock.

While the body is stiff, the suspension is soft, resulting in some body roll and occasional bouts of jostling. However, it’s relatively minor and the ride is reasonably comfortable, especially on good road roads.

Despite being soft, the Defender handles well for such a heavy and tall vehicle. You can take corners faster than you should and there’s little drama until you start pushing things too far. The steering is also pretty good as it’s nicely weighted and provides some degree of feedback. This is often overlooked in SUVs, so it’s nice to see a steering wheel that feels like it’s actually connected to something. 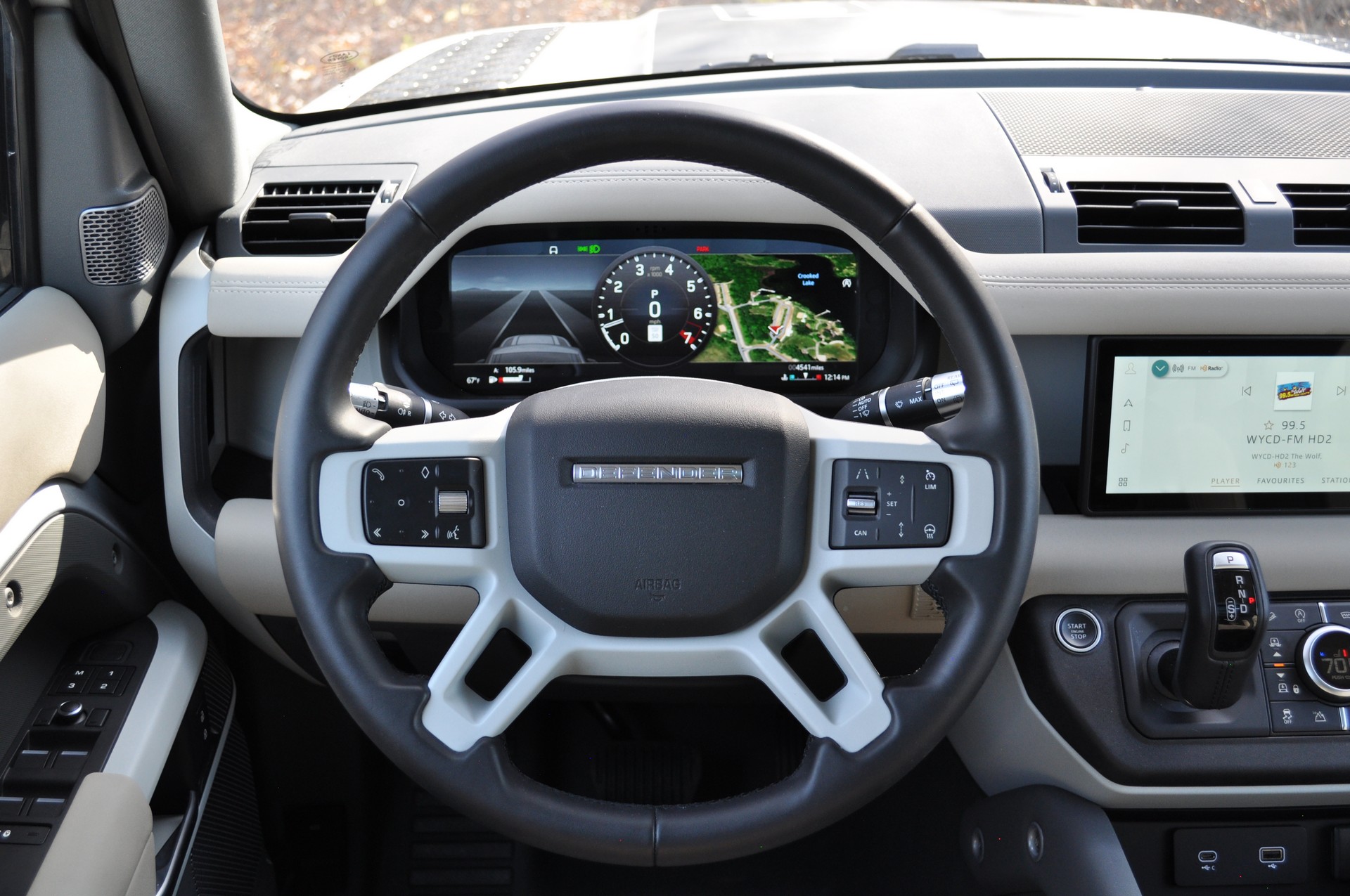 All in all, the Defender rides a bit truck-ish and you’ll feel even moderate road imperfections. However, nothing really upsets the ride and the SUV feels best when driven in a relaxed manner.

To Moab And Back 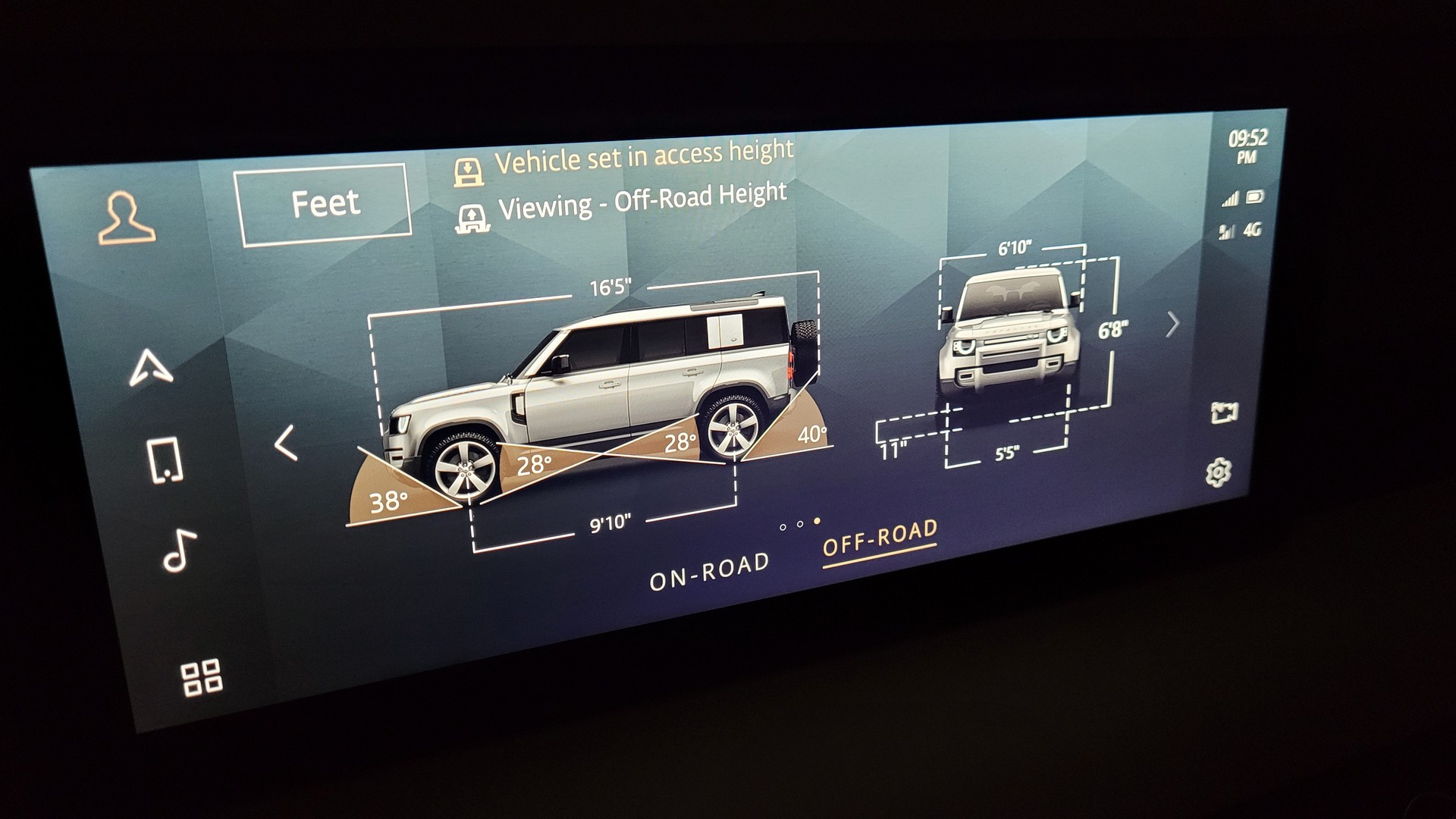 The Defender has always been renowned for its ability to venture off the beaten path and this factored in heavily during the all-new model’s development. In particular, it was subjected to some of the toughest terrain in the world including the extreme trails of Moab, Utah. There it was tested on Hell’s Revenge, Poison Spider and Steel Bender.

While the 2021 Defender 90 has an independent coil suspension, all Defender 110s have an electronically controlled air suspension. It’s adjustable at the push of a button and provides 8.6 inches (218 mm) of ground clearance in its standard setting. To aid entry and egress, there’s an access mode which lowers the vehicle by up to 1.6 inches (40 mm). To conquer tough terrain, the suspension can be raised 1.6 inches (40 mm) above the normal ride height. If that’s still not enough, you can raise it by an additional 1.3 inches (35 mm). 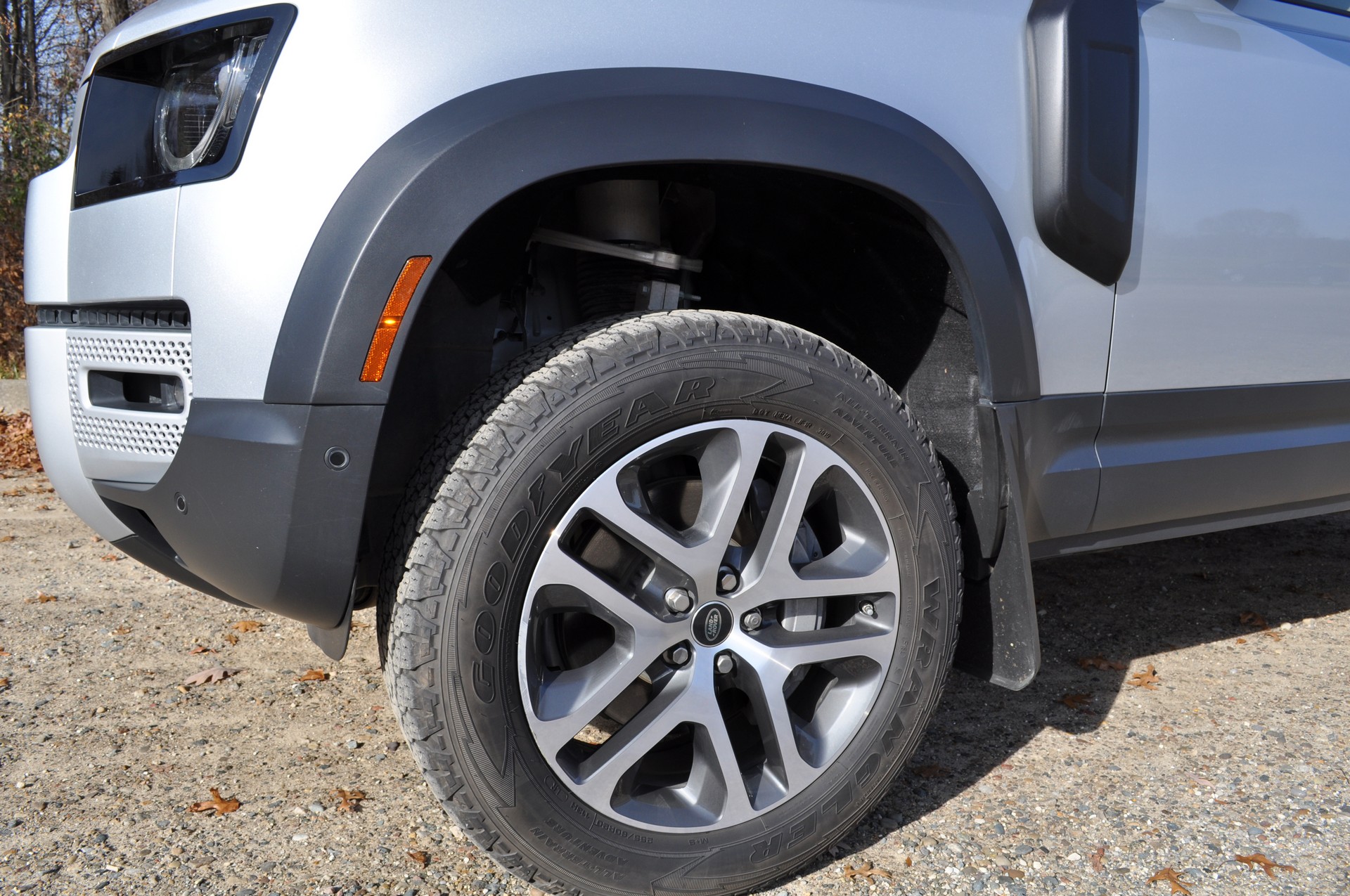 When the Defender is set up for off-roading, it has approach, departure and breakover angles of 38, 40 and 28 degrees respectively. Itl also has a wading depth of 35.4 inches (899 mm), but it’s important to note that the raised air intake isn’t a snorkel.

Of course, the air suspension is just one item in the Defender’s off-road toolbox. It also has a two-speed transfer case, a locking central differential and hill descent control. Customers can also add an electronic active / locking rear differential, off-road tires and the Terrain Response 2 system. The latter monitors driving conditions and automatically selects the most suitable terrain setting. There’s also the All Terrain Progress Control system which is essentially cruise control for off-roading as it keeps the Defender traveling at a set speed between 1.1 – 18 mph (1.8 – 29 km/h).

The 2020 Defender is currently available and pricing starts at $49,900 for the 110 version. Base models come moderately equipped as they feature fabric seats and 18-inch steel wheels. There are some luxuries including LED headlights, auto-dimming mirrors, a wireless smartphone charger and the aforementioned 10-inch infotainment system, while on the safety front there’s an assortment of driver assistance systems such as blind spot assist, lane keep assist, automatic emergency braking and traffic sign recognition technology.

The Defender is extensively customizable, but prices climb quickly. That was certainly the case with our 110 SE which had a base price of $62,250 and was equipped with a plethora of options that pushed the sticker to $77,775. It’s also worth mentioning the Explorer Pack would add an extra $4,800 to the vehicle.

While we drove the 2020 Defender, the 2021 model was announced a few months ago and will arrive at U.S. dealerships early next year. There are few notable updates including a new X-Dynamic variant and the Defender 90, which was delayed due to the coronavirus pandemic. Pricing starts at $46,100 for the 2021 Defender 90 and $50,500 for the 110. 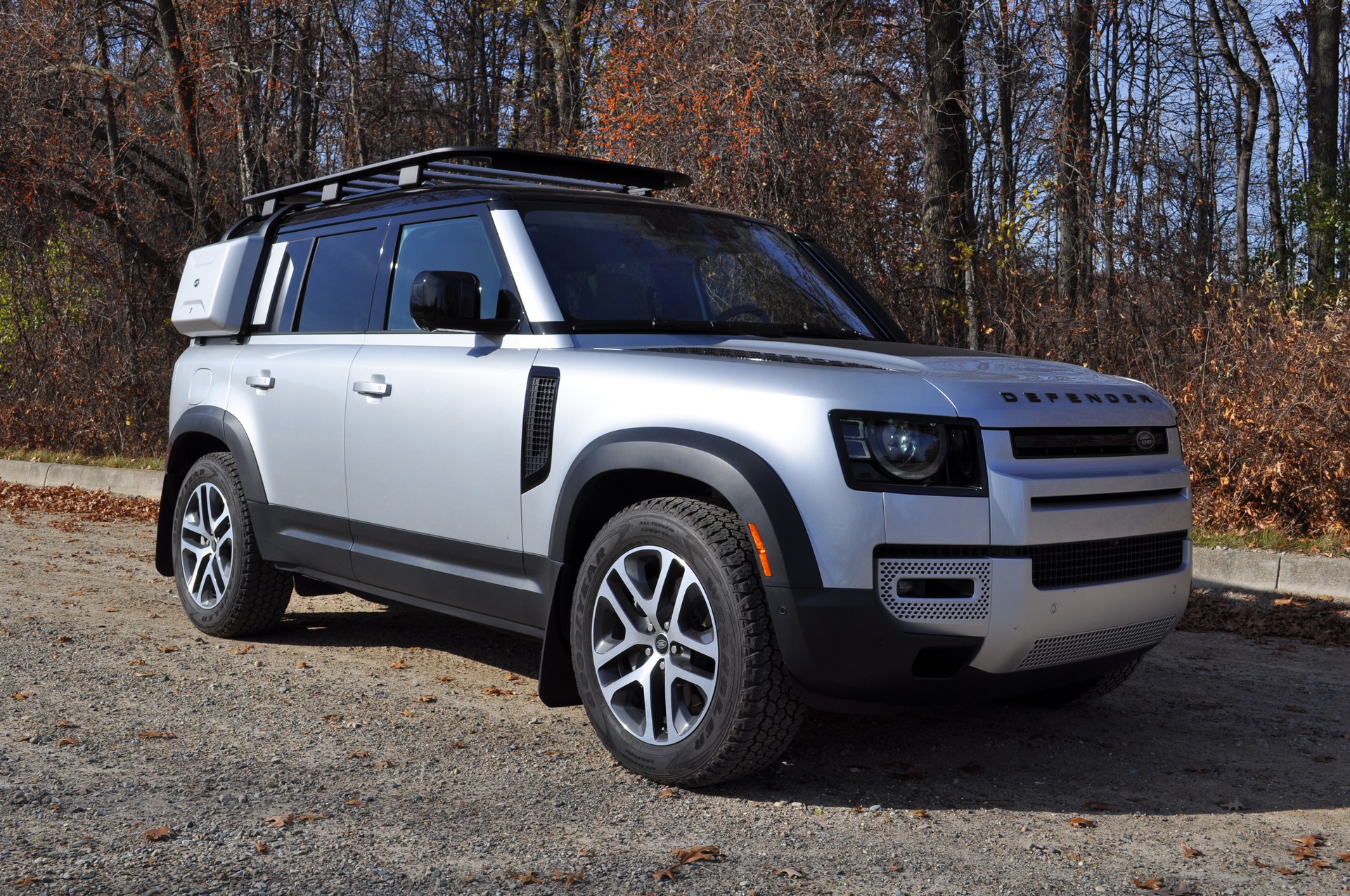 Reviving an icon isn’t easy, but Land Rover nailed it with the Defender. The all-new model clearly echoes its predecessor, but is far more comfortable while also maintaining the legendary off-road capability.

On top of that, the Defender has character in spades. It stands out from the crowd and should appeal to both off-road enthusiasts as well as consumers looking for something a little different.

That being said, the model isn’t for everyone. The Land Rover Discovery features a more accommodating and luxurious interior as well as plenty of off-road prowess. Traditional luxury crossovers have a more comfortable and controlled ride, but they the lack the Defender’s undeniable cool factor and off-road capability.

At the end of the day, the Defender is quick, spacious for five and can tow up to 8,201 lbs (3,720 kg). It can also tackle Moab and Costco runs with relative ease, so while it might not be perfect, there’s a lot of love.