Not too long ago, we reviewed Zebronics’ entry-level sound bar, the Zeb Jukebar 4000, and were quite pleased with what it offered at a very competitive price tag. Today, we closely inspect their flagship product that not only flaunts a significantly higher 450W output, but also boasts of support for Dolby Atmos in the sub-20K price bracket in India; something I don’t remember seeing before. Let’s see whether the Dolby Atmos branding is just a marketing gimmick or if the Zeb-Juke Bar 9700 Pro truly delivers a theatre-like experience at home.

The Juke Bar 9700 Pro doesn’t have a striking design, and feels a touch plasticy near the sides and at the back. It has a rectangular body with a black/dark grey metal grille up front, and a couple of light grey squares on the sides. The plastic back is prone to scratches. The Zebronics logo is placed at the left of the bar, while a distinct Dolby Atmos logo can be spotted at the right. The construction is rugged, and the soundbar is quite heavy at close to 4 KG; almost as much as the subwoofer. The bar is 96 cm long – about the length of a 43-inch TV. You get a wired subwoofer with a 6.5-inch driver placed on the right side.

The Zebronics logo is placed at the left of the bar, while a distinct Dolby Atmos logo can be spotted at the right. Image: Tech2/Ameya Dalvi

The bundled cables are fairly long, and you have the option of wall-mounting the soundbar with the bracket and fasteners provided in the package. However, the ports would be hard to access once it’s wall-mounted, as all the input ports are placed at the back of the soundbar. There is just enough space to connect the cables, and you will need to connect them before hanging the unit on the wall. The USB port is also placed at the back, and plugging in a USB drive would be quite a task. You may need a USB extension cable to do that. Placing the USB port on the side would have made better design sense. 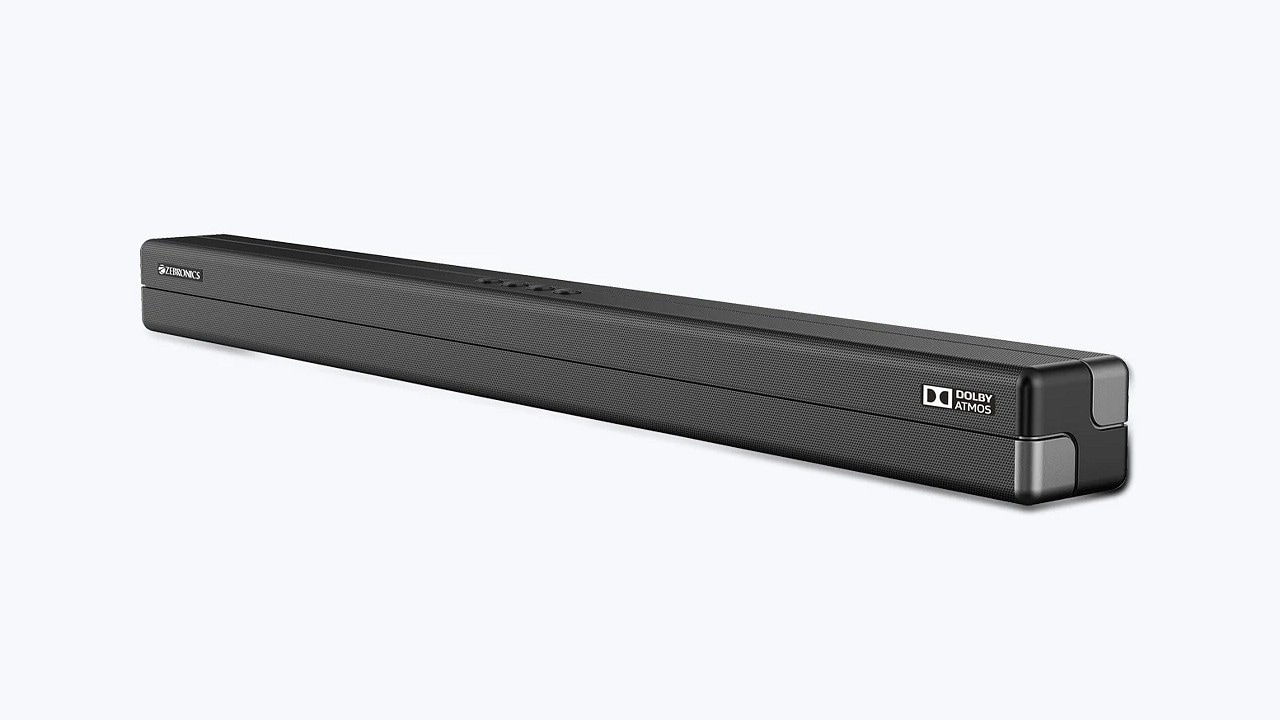 The Juke Bar 9700 Pro doesn’t have a striking design, and feels a touch plasticy near the sides and at the back.

The power button, volume control keys and input selection button are on the top of the soundbar. There is a small, white, 7-segment LED display at the front that displays the input mode as well as volume/bass/treble level, among other things. It also informs you when the bar recognises a Dolby Atmos signal, as those letters scroll across the display. A wireless remote control is also bundled in the package, which is exactly like the one you get on their entry-level model.

The power button, volume control keys and input selection button are on the top of the soundbar. Image: Tech2/Ameya Dalvi

There are plenty of connectivity options on this Dolby Atmos-certified soundbar, the most striking being three HDMI ports, one of which supports ARC input. In addition, you get Bluetooth 5.0, 3.5 mm Aux in, Optical in and USB. It has most of the bases covered in this department. The soundbar has a 4.1.2 setup, with two pairs of 5.71 cm front-facing drivers to take care of high and mid-range frequencies, and a pair of 5.08 cm upward-facing drivers that work as height channels. They can deliver a combined output of 300W RMS, while the subwoofer adds another 150W RMS to the equation, taking the total rated power of the system to a whopping 450W RMS. The rated frequency response ranges between 45 Hz and 20 KHz.

There are plenty of connectivity options on this Dolby Atmos-certified soundbar, the most striking being three HDMI ports. Image: Tech2/Ameya Dalvi

The Juke Bar 9700 Pro is accompanied by a full-function wireless remote control that you get with most Zebronics soundbars. It has decent build quality, with controls for volume, bass, treble, equaliser presets (Music, Movie, News, 3D), input selection and audio playback. There’s a power and mute button too. I can’t think of anything important that the company has missed out here. Take good care of the remote, as the audio tuning functions cannot be accessed without it.

A wireless remote control is also bundled in the package, which is exactly like the one you get on their entry-level model. Image: Tech2/Ameya Dalvi

I tried multiple input sources to test the soundbar, but you get the best out of this device only through the HDMI input, because that’s how you feed it a Dolby Atmos signal. I mainly used an Amazon Fire TV Stick 4K to test this soundbar. You can either plug the Fire TV Stick into the TV and enable ‘Passthrough’ on HDMI ARC to let the soundbar process the audio, or plug the stick into one of the HDMI ports on the bar, and then send the video signal to the TV via ARC. I would suggest the latter, especially when playing content from Prime Video, as the audio quality is significantly better.

There is a catch though. The soundbar cannot send back Dolby Vision signal to the TV over HDMI; probably a licensing issue. All the Dolby Vision content on Netflix will play in HDR10 when the Fire TV Stick is plugged into the bar. In such a scenario, plug the stick back into the TV or use the Netflix app on the TV for better results. This is a bit fiddly and technical, but it needs to be stated, and I’ve tried to keep it as simple as possible.

Unfortunately, Dolby Atmos content on OTT services in India is sparse at the moment. Only a couple of shows and a couple of movies on Prime Video offer that audio standard, and I used all that was available to test the Atmos capabilities of the Juke Bar 9700 Pro. I am happy to report that the soundbar handles Atmos very well. The output is loud, clear and punchy most of the time. Though one cannot expect the same surround sound effect as with physical rear speakers, it provides a highly immersive experience in a mid- to large-sized room. The positional audio is much better than average soundbars, and one can feel the virtual surround effect with gunshots and explosions. The clap of thunder in one of the scenes from Carnival Row actually shook the room at 50 percent loudness, reminding me that the 450 Watts RMS output is not just a number.

Moving on from Atmos to Dolby Digital Plus content, though it doesn’t sound as good as the former, there isn’t a huge drop in audio quality either. The soundbar handles it well and provides an enjoyable experience. In both cases, the dialogues are clear and there is ample thump in the low-end frequencies. That being said, I would have preferred tighter bass from the subwoofer. The boomy nature of the bass is evident in content outside of Atmos and Dolby Digital Plus. You can throttle the bass and treble between -5 to 5, but dropping the bass to minimum also doesn’t help as much as I’d like. It affects music playback the worst, and it is far from enjoyable on this soundbar. But then, this soundbar is meant for movies and web series, rather than music.

While there are other audio inputs available on this soundbar, I wouldn’t want to waste your time talking about them. The Aux input works fine here, but you won’t get a Dolby signal on that. This soundbar is meant to be used with HDMI ARC for maximum effect; it’s wasted otherwise. A word on Bluetooth connectivity: while the pairing was quick and the connection stable, there is a noticeable delay between audio and video in this mode. Best to restrict it to playing music from your phone, at most. Also, the master volume of this soundbar doesn’t sync with the Bluetooth volume of all source devices. It works fine for some, but in other cases, you have to adjust the source volume and that of the soundbar individually; not very efficient, that.

To sum up the performance, I can say that it is very good when playing Dolby Atmos or Dolby Digital Plus audio streams. Most other OTT content with reasonably good audio quality is also enjoyable on this soundbar, though with a bit more bass than ideal. Music playback is best avoided here, especially bass-heavy tracks.

The Zebronics Juke Bar 9700 Pro Dolby Atmos soundbar is priced at Rs 17,999 with a one year warranty, and often sells on Flipkart for a couple of thousand lower. The price may seem a tad high for a soundbar from a lesser-known brand in this segment – as compared to the Sonys and JBLs of the world – but then, you don’t get a Dolby Atmos soundbar from those guys anywhere close to what the 9700 Pro sells for. This Zebronics soundbar offers multiple audio inputs, including 3x HDMI ports, a powerful 450W sound output and an immersive audio experience when playing the right kind of content; something extremely rare in this price bracket.

Having said that, this is not a product for one and all. Buy this if you are looking for Dolby Atmos audio output on a budget, and more importantly, if you have a source device like a Fire TV Stick 4K or a Blu-ray player that is Dolby Atmos-compliant to bring the best out of this soundbar.